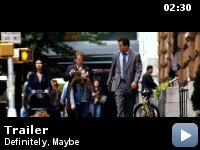 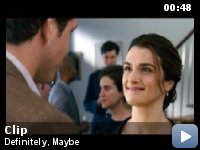 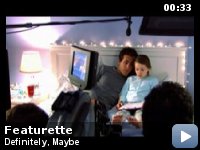 A political consultant tries to explain his impending divorce and past relationships to his 11-year-old daughter.

Storyline
Romantic comedy: Will Hayes, a 30-something Manhattan dad is in the midst of a divorce when his 10 year old daughter, Maya, starts to question him about his life before marriage. Maya wants to know absolutely everything about how her parents met and fell in love. Will's story begins in 1992, as a young, starry-eyed aspiring politician who moves to New York from Wisconsin in order to work on the Clinton campaign. For Maya, Will relives his past as a idealistic young man learning the ins and outs of big city politics, and recounts the history of his romantic relationships with three very different women. On the campaign, Will's best buddy is Russell McCormack. They not only have similar political aspirations, they share the same type of girl problems, too. Will hopelessly attempts a "PG" version of his story for his daughter ad changes the names so Maya has to guess who he finally married…

Abigail Breslin's character makes reference to her American Girls doll collection stating that they would be "worth a fortune". Breslin is the third actress to play one of the American Girls, Kit Kittredge, in her own movie (
Kit Kittredge: An American Girl). Both films were released in 2008. (Other movies made from American Girls stories are based on the characters Felicity and Samantha)

Continuity:
When Will goes to visit Summer, Hampton opens the door with his glasses hanging partly under his chin. He adjusts it correctly and then invites Will in. When they're inside the apartment, Hampton's glasses is crooked and under the chin again.

Will Hayes:
Summer tells me you're dating a sophomore.

Hampton Roth:
No, its two freshman. Which, on a good day, add up to a sophomore, I suppose.

Saw an advance screening and actually enjoyed it!


and that's saying a lot since I'm not a "romantic comedy" kind of gal.

The little girl is fabulous. Good casting. She's adorable without being
perfect. Kevin Kline was an absolute delight as an unapologetic drunken
writer/professor who also happens to be quite full of himself. Rachel
Weisz (whom I normally do not care for) was completely (and
unexpectedly) charming. Ryan Reynolds was also a good casting choice.
Unexpectedly believable as a dad.


The bulk of the movie is him explaining to his daughter, bedtime story
style (told entirely in flashbacks) about love and how he met her
mother, with her being the proverbial "happy ending". Except … she
seems to be the only one who notices that her Dad really isn't happy at
all. Isla Fisher also shines. Watching her character grow from someone
who is completely devoid of any direction or purpose into a real woman,
complete with self-esteem, was a nice touch.

Loved the relationship stories. It's amazing what you don't see when
you are in a relationship, only to come to a realization much later.
Anyone who has ever traded a trip on the QEII for a proverbial three
hour tour on the S.S. Minnow relationship-wise will totally relate.

The fact that Ryan Reynolds sometimes gets so carried away with the
story that he forgets he is talking to a little girl leads to a few
(ok, so it's a lot) contrived chuckles along with a couple of genuinely
funny moments.

It's not going to win an Oscar or break a box office record, but if you
want a completely enjoyable two hour escape … see this movie.