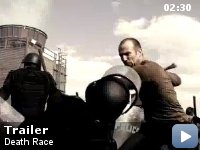 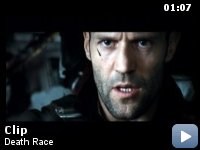 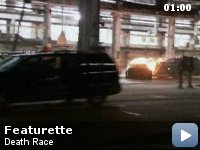 Ex-con Jensen Ames is forced by the warden of a notorious prison to compete in our post-industrial world's most popular sport: a car race in which inmates must brutalize and kill one another on the road to victory.

Storyline
In 2012, amid economic chaos and high unemployment, Americans watch by the millions as criminals with life sentences race armored cars on Terminal Island. Two-thirds of the combatants die but the winner may earn his freedom. On the day he loses his job, steelworker Jensen Ames is arrested for his wife's murder. Sent to Terminal Island, he's offered an out by the steely and manipulative Warden Hennessey – race as the popular mask-wearing (but now dead) champion, Frankenstein, or rot in prison. Jensen makes the bargain. As the three-stage race approaches, he realizes that the whole thing may be a set up – can an anonymous man behind a mask get revenge and win his release?

Taglines:
Get ready for a killer race.

It took Paul W.S. Anderson over 13 years to get his adaptation on to the big screen.

Case:
[while being shot at during Death Race]
Damn it!

who needs a plot when there's explosion and mayhem?


2012 the economy has hit bottom, broke through and has kept on
descending. Along the way prisons have been handed over to the private
sector that have chosen to make a profit by broadcasting gladiatorial
style death matches starring the inmates, with the reward to the
inmates after 5 victories – FREEDOM Enter Jensen Ames (Jason Stratham)
a recently unemployed steel worker and former race car driver who lost
his license but no matter how bad things are, he's a happy man as long
as he has his family.


That is, until he's set up for the murder of his wife, imprisoned, and
forced to compete in Death Race if he ever hopes to see his daughter
again.

But enough of the plot! A paragraph blurb at the start and 8 minutes of
character development is pushing the limits of this flick and that's
not why a person would see a W.S. Anderson/Jason Stratham action flick
and besides, a plot would allow "plot holes" and who needs to deal with
that headache? The rest of the movie takes place in the 3 days of Death
Race. The first 2 days are competition/elimination rounds reminiscent
of Mario Kart as if it was designed by some rogue member of GTA on a
disgruntled day but who loved the hidden short cuts and power-ups.

Amongst all the adrenaline filled action, Anderson makes sure to toss
in the occasional character development or when he's feeling really
daring he'll toss in some pseudo-dramatic realization our hero comes
across which helps remind the movie-goer that the movie has a plot
rather than just a string of explosive action sequence. All of this is
done with the utmost use of cliché and designed to inspire the
excitable little 12 year old boy in many of us to stay riveted in our
seats as we wait for Jensen to strike with angry revenge for all he's
been through.

The movie is everything a modern day movie aficionado should not like.
It's brainless, sexist, ridiculously violent, and lacks any redeemable
qualities. These are also all the reasons why I had so much fun with
the movie. I went seeing what I expected and that's exactly what I
wanted to see!