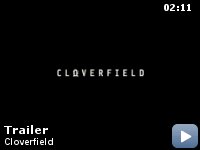 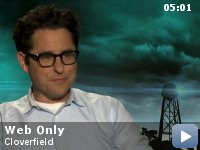 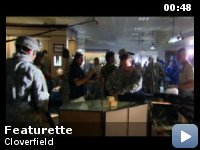 Revolves around a monster attack in New York as told from the point of view of a small group of people.

Storyline
Cloverfield follows five New Yorkers from the perspective of a hand-held video camera. The movie is exactly the length of a DV Tape and a sub-plot is established by showing bits and pieces of video previously recorded on the tape that is being recorded over. The movie starts as a monster of unknown origin destroys a building. As they go to investigate, parts of the building and the head of the Statue of Liberty come raining down. The movie follows their adventure trying to escape and save a friend, a love interest of the main character.

Taglines:
Some Thing Has Found Us

The rats used in the tunnel scene were specially-trained and colored with a dark, charcoal-like substance to give them the appearance of wild, dirty tunnel rats. The rats in the final shot were completely computer-generated.

Revealing mistakes:
No camera comes with an integrated light (which it is obviously as Hud must be pointed to it) that has such power as it is seen in the tunnel.


Some people have derisively compared this film to The Blair Witch
Project because it was all told from the point of view of someone's
shaking camera. Unless you have motion sickness, I don't think that's a
bad thing. What matters is who's in front of the camera. While The
Blair Witch Project featured annoying people screaming at each other,
this movie actually made me care about the characters. In fact if it
had continued with the romantic drama tone established during the first
half hour, I STILL think it would have been worth watching and that's
the biggest compliment I can give it.

Of course people will be watching this movie for the visceral pleasure
and Colverfield delivers. Many thrilling visual and sound effects wowed
me (there were a few times I yelled out in shock at a sudden scare).
Any horror film will also benefit from a sense of entrapment and this
movie pulls off the seemingly impossible feat of making New York City
seem claustrophobic because there was seemingly nowhere to hide from
the monster.

What is the monster? Whatever it is clearly is meant to be an allegory
for the carnage 9/11 inflicted on New York, much the same way Godzilla
was meant to be an allegory for the damage inflicted on Japan by the
atom bomb. There are moments seemingly recreating the documentary
footage from 9/11, and they give the film verisimilitude. Touching upon
real life horror, plus creating characters that we can relate to and
care about, and assaulting our senses with incredible sights and sounds
leads to entertainment worth watching many times over. Perhaps the 80
minute run time will bother some people, but on the other hand I think
that's better than a film wearing out its welcome. Great job J.J.
Abrams and company!