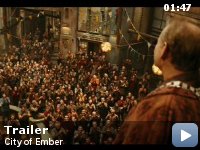 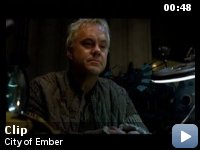 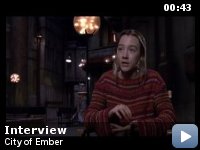 For generations, the people of the City of Ember have flourished in an amazing world of glittering lights. But Ember's once powerful generator is failing … and the great lamps that illuminate the city are starting to flicker.

Storyline
When mankind is about to come to an end, a group of scientists decide to create and populate a city deep underground. The city of Ember is to last for 200 years after which its inhabitants are to retrieve from a strong box instructions to return to the surface. Over time however, the message is lost and life in Ember is rapidly deteriorating. Their power supply is failing and food is being rationed. It's left to two young adults to unearth the secret of Ember and to lead the way out.

The rat-like creature that chases the main characters is a giant version of the star nosed mole ("Condylura cristata"), native from Eastern Canada and North East United States. Given the fact these animals are blind, they use their nasal tentacles, known as Eimer's organ, to detect food. Although all European moles share this feature, the star nosed mole is the only animal with such an specialized one. Without counting its size in the movie (real animals are between 15 to 20 cm long) nothing else was changed.

Continuity:
As Doon is walking to look at the Generator room, a girl in full orange work gear and yellow boots walks across the control room and towards a hall. The shot changes to the door. Then when it goes back to Doon, the same girl(orange gear, yellow boots) gets up from the left and starts walking across the room again, before the shot changes back to the door.

Doon Harrow:
My dad made this.

City of Ember Movie Review from The Massie Twins


City of Ember employs a supremely majestic setting to unravel its
end-of-the-world sci-fi adventure, but several missed opportunities
keep it from escaping its family-friendly roller coaster ride feel and
becoming something truly unique. However, a few too-convenient outcomes
and a rushed introduction can't take away the undeniable enjoyment of
solving the epic mystery of the once-grand city with the two
enthusiastic leads.

When the world ended, a group of elite scientists and engineers
determined that the only way to save their way of life was to build an
underground city far below the decimated surface. Deciding upon a
lifespan of 200 years for their city, the key to salvation was locked
away in a metal box to be handed down from one mayor to the next until
the time was right. But somewhere along the way the box was forgotten…
Years and years have passed and the once mighty City of Ember steadily
falters as corrupt officials dictate an antiquated way of life and the
massive generator that powers the city frequently fails. Now it is up
to two ambitious youths, Doon Harrow (Harry Treadaway) and Lina
Mayfleet (Saoirse Ronan) to solve the mystery behind the origins of
their city and find a way out before their world is blanketed in
darkness forever.

Easily the most impressive piece of the City of Ember puzzle is the
delightfully ominous science-fiction visuals. The massive sets were
built in Northern Ireland in the shipyard-turned-soundstage of the
location the Titanic was actually constructed in (now the largest
soundstage in the world) and it's never more apparent than in the
beautiful crane shots through the underground city. The CG elements are
also top-notch, but the practical effects flawlessly immerse the
audience in the fantasy world of pipeworks and generators.

While the setting is brilliantly realized, the characters that populate
the grandiose city receive far too little development. The introduction
and relationship between the two main characters feels truncated and
never really furthers as the story progresses, and the origins of each
remain as enigmatic as that of the shining city. The adult characters
throughout never provide as much support as they should to enhance the
understanding and motives behind the city's cryptic suppression. At
least Bill Murray hams it up as the gluttonous mayor with a devious
agenda of his own.

Like something blended from a video game universe (Bioshock in
particular) and 12 Monkeys' post-apocalyptic subterranean sewer-world
(or even Terminator's hypogeal bomb shelters), City of Ember packs
adventure and intrigue into the wondrous exploration of a society
crumbling from age and deceit. As the young heroes scour the dank
passages and forgotten tunnels, it's difficult not to become immersed
in the fun of uncovering clues and discovering secrets alongside the
venturous duo.