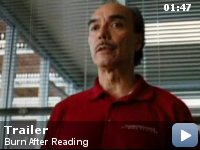 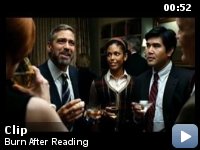 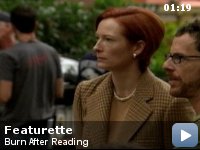 A disk containing the memoirs of a CIA agent ends up in the hands of two unscrupulous gym employees who attempt to sell it.

Storyline
Osbourne Cox, a Balkan expert, is fired at the CIA, so he begins a memoir. His wife wants a divorce and expects her lover, Harry, a philandering State Department marshal, to leave his wife. A diskette falls out of a gym bag at a Georgetown fitness center. Two employees there try to turn it into cash: Linda, who wants money for elective surgery, and Chad, an amiable goof. Information on the disc leads them to Osbourne who rejects their sales pitch; then they visit the Russian embassy. To sweeten the pot, they decide they need more of Osbourne's secrets. Meanwhile, Linda's boss likes her, and Harry's wife leaves for a book tour. All roads lead to Osbourne's house.

The opening film of the 2008 Venice Film Festival.

Harry Pfarrer:
Maybe I can get a run in.

The Coens' funniest film since "The Big Lebowski"


I'm not the only one to notice the pattern in the Coens' filmography:
"Blood Simple." was followed by "Raising Arizona", "Fargo" by "The Big
Lebowski", and "No Country for Old Men" by "Burn After Reading". The
main concern one had about this film is whether it would be an
"Intolerable Cruelty" or a "Big Lebowski" for the Coens. Let's put it
this way: the reviews have been mixed, especially from major mainstream
media critics. Guess what other Coen comedy received mixed reviews and
was accused of being a somewhat tired mess? Yep, "The Big Lebowski".


The Coens' sense of humor is very distinctive, and I'm not talking
about stuff like "Intolerable Cruelty" (this one the mainstream media
liked, go figure) and "The Ladykillers", which featured numerous
commercial concessions. I'm talking about the vicious, cruel,
misanthropic farce that gets self-important critics' knickers in a
twist. Describing "Burn After Reading" as a screwball spy farce makes
it sound much more "Austin Powers" than it is. There is a lot of
silliness, but the sort of silliness one finds in a Howard Hawks
comedy, not in most comedies that have been made recently. It's a
screwball comedy but a pretty dark one.

This is most certainly an acquired taste. It is not going to go down
well with people who can't laugh at murder, things going terribly wrong
for innocent people, or the Cones' trademark dialogue that pops up even
in 'serious' movies like "Fargo" and "No Country for Old Men". However,
"Burn After Reading" was seemingly tailor-made for my cruel sense of
humor, as I found it to be easily the most inspired comedy script in a
long time. It's a conspiracy espionage thriller with no stakes, nothing
to fight over, a bunch of complete fools and idiots caught in the
middle of it ("a league of morons" if you listen to John Malkovich's
character), and disastrous consequences for just about everyone. Take
out the jokes and you could have a tragedy but as it stands this is the
funniest movie the Coens have made since "The Big Lebowski", if not the
best, and that includes "O Brother, Where Art Thou?".

One really shouldn't know anything about the plot or how it unfolds
prior to seeing it, as this is a film which is far more
intricately-plotted than most critics are giving it credit for. The
basic concept is that Frances McDormand and Brad Pitt's characters come
across a disc they think contains top secret intelligence. What follows
is, as described above, a thriller with no stakes and a bunch of
idiots. It's one of those movies where you really shouldn't be laughing
(for ethical reasons) but are, and it will have you laughing through
your disapproval for basically the entirety of the film after the
opening fifteen minutes or so, which are rough in comparison to the
rest of the film, and to be honest the only thing that keeps this film
from being absolutely brilliant and the Coens' best movie since
"Lebowski". Just don't go in expecting a movie that looks as beautiful
as many of their movies do- Lubezki is no Deakins, at least not based
on his work here, and the Coens are very clearly attempting to emulate
in many ways the look of the sort of thriller they're basing this on.
It's functional, well-shot, and well-directed, but the writing and
acting are the main attractions here.

Of course, "Burn After Reading" will be dismissed as having little
worth and for being a disposable farce by many. Well, if only they knew
how hard it is to do comedy well. I'd reckon this was harder to write
than the (admittedly tremendous) "No Country for Old Men", which was
adapted from a novel that might as well have been a screenplay if
formatted correctly. The movie may not start brilliantly (not that it
isn't good even early on), but once the Coens start firing on all
cylinders they never stop, and the dream cast certainly doesn't either
(Brad Pitt has a smaller role than most cast members here, but he is
absolutely brilliant in the role), showing tremendous comic skill that
few would have guessed most of them had. The final scene may very well
be one of the best I have seen in a long, long time.