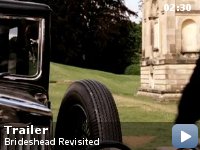 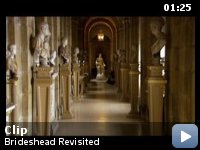 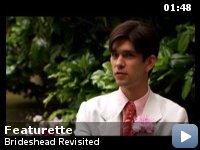 A poignant story of forbidden love and the loss of innocence set in England prior to the Second World War.

Storyline
The memoirs of Captain Charles Ryder who is stationed at Brideshead Castle during WWII and remembers his involvement with the owners of the Brideshead estate: the aristocratic yet Catholic Flyte family and in particular brother and sister Sebastian and Julia.

Taglines:
Love is not ours to control

After Charles "betrays" Sebastian in Venice, there is a shot of an altarpiece in an Italian church, with a depiction of the "Martyrdom of St. Sebastian." You can identify him by the arrows protruding from his body.

Factual errors:
In Lord Marchmain's deathbed scene, Fr. Mackay imparts absolution while Charles Ryder and members of the family are in attendance. Absolution is never imparted in public in this way. The others would have been asked to step out. Moreover, the Latin form of the absolution given, although it is the correct traditional one, is badly mispronounced and contains several errors in the details of the Latin text.

Charles Ryder:
[Internal monologue while walking out of Brideshead Castle]
If you asked me now who I am, the only answer I could give with any certainty would be my name: Charles Ryder. For the rest: my loves, my hates, down even to my deepest desires, I can no longer say whether these emotions are my own, or stolen from those I once so desperately wished to be. On second thought, one emotion remains my own. Alone among the borrowed and the second-hand, as pure as that faith from which I am still in flight: Guilt.

Those who have not seen the 1981 Granada television miniseries about
the aristocratic English Catholic Marchmain family, their spiritual
torments, and their conflicted friend, Charles Ryder, may be at an
advantage in watching this new adaptation. That series was superb and
took the time to do more than justice to the satirical Evelyn Waugh's
uncharacteristically solemn and lengthy 1945 novel. This film version,
much briefer than the miniseries but not exactly short at 135 minutes,
has one advantage: it shows off the plot in sharp outline.


The miniseries may actually blur that basic element. It was hypnotic,
rolling on from week to week for those who first saw it gathering an
accumulation of nostalgia and melancholy, beautifully mounted and
graced by the likes of John Gielgud, Laurence Olivier, Claire Bloom,
and Stéphane Audran. It also put Jeremy Irons on the map in the central
role of Charles, and by his own admission made him "fall out of love
with jeans" through wearing the elegant clothes of a well-turned-out
young man of the 1920's. The miniseries can take the time to develop
important minor characters. The book is an elaborate portrait of a
generation and an era. Waugh wrote short witty novels mostly. But this
time, writing about wealth and grandeur and Catholicism, he waxes
poetic and goes into near-Proustian detail.

Sebastian's grand family draws the awestruck middle-class Charles in
and eventually spits him out, leaving him shattered, but lastingly
impressed by the power of the Marchmains' Catholic faith. As the tale
opens (in all versions), he's reminiscing about it all much later as an
army officer at the end of World War II ironically posted at
Brideshead, the glorious estate where Sebastian grew up–a place
Charles came to know intimately even though it was never fully
accessible to him.

Maybe Waugh in his novel was more concerned with the nostalgia for a
prewar life he imagined as splendid and carefree, for a class to which
he aspired, and more self-consciously dwelling on his infatuation with
Catholicism, to which he was a convert. But the story, as we see in
this new film, turns on a kind of love triangle–one heavy-laden with
sexual and spiritual conflict.

Charles Ryder (Matthew Goode) and Sebastian (Ben Whishaw) enter into an
intense romantic and alcoholic friendship when Charles comes for his
first year at Oxford. The film carries this a bit further than either
the novel or the TV version, showing the two handsome young men not
only often affectionately and playfully arm in arm but in an intimate
bathroom scene and once, anyway, sharing a lingering drunken kiss. This
despite the fact that a relative sternly warned Charles to avoid
"sodomites" when he first arrived at university. Whishaw (of 'Perfume'
and 'I'm Not There') has a touching, wispy, vulnerable quality that
distinguishes him from the TV Anthony Andrews, whose Sebastian is more
brassy, slick, confident and social. When Charles meets Sebastian's
sister Julia (Hayley Atwall in the film; the impossibly elegant Diana
Quick in the miniseries), and lights a cigarette for her in a car, he
immediately hears, in the words of the novel, echoed in the TV
narration, "a thin bat's squeak of sexuality," and the equation
changes. He begins to desire Julia. Apart from her unmistakable allure
she's a way for Charles to possess the Marchmain world more completely.
This, especially in the film, immediately clouds the relationship with
Sebastian, who grows cold, and simultaneously sinks deeper into
dipsomania.

In the miniseries there is more time for Charles's profound infatuation
with his aristocratic young Catholic friend and his magnificent world
to sink in and for Sebastian's decline into alcoholism to unwind with
slow, horrible inevitability. The latter is memorably described in the
book (repeated in the TV narration) as feeling like "a blow, expected,
repeated, falling on a bruise, with no smart or shock of surprise, only
a dull and sickening pain and the doubt whether another one like it
could be borne." It has to be rushed a bit in the film. But the process
isn't falsified, only made more clear.

Their mother, Lady Marchmain (film, Emma Thompson; TV, Claire Bloom) at
first finds Charles sensible and polite, a good influence for the
dissolute and sexually wayward Sebastian. But she can't bend Charles to
her will. It emerges that Lord Marchmain (film, Michael Gambon; TV,
Laurence Olivier) has long ago fled from his wife's control to Venice
and lives with a mistress, Cara (film, Greta Schacchi; TV, Stéphane
Audran). A visit to Venice leads to kisses with Julia and also
introduces Charles to another equally intoxicating kind of
beauty–besides which in Italy, everybody's Catholic, but as Cara
points out, of a more relaxed sort than the cloying Lady Marchmain's.
Charles can't have Julia as long as Lady Marchmain is around. As
circumstances turn out, their idyll is brief, and happens after Charles
is married and a successful painter. Sebastian has wound up with a weak
German man in Morocco, in terrible health, a saintly drunkard. Julia
and Lord Marchmain have last minute returns to their faith and Charles
is left out in the cold.

Viewing all three versions, book, TV, screen, one sees the story isn't
about Charles or about anybody really. It's about temptation. It's
about the world between the wars, through eyes clouded by longing. The
adaptation is very creditable. It shows the appeal of the story. Those
who are entranced by it ought to read Waugh's book and rent DVD's of
the Granada miniseries–which was about the best thing ever done for
television. It delivers long passages from the book verbatim. Waugh was
best in his short witty early satires but he turns many a good phrase
in this, his most popular (and for a while his own favorite) book. Then
he rejected it, and one can see why. Its sentimentality is so unlike
him at his best. But it adapts well.