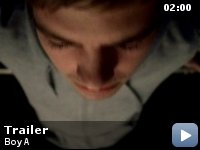 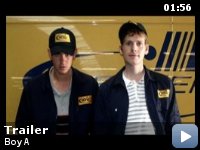 The story of a young ex-con Jack, newly released from serving a prison sentence for a murder he committed as a child.

Storyline
A young man is released from prison after many years and given a new identity in a new town. Aided by a supervisor who becomes like a father to him he finds a job and friends and hesitantly starts a relationship with a compassionate girl. But the secret of the heinous crime he committed as a boy weighs down on him, and he learns that it is not so easy to escape your past.

Taglines:
Who Decides Who Gets A Second Chance?

In a retrospective scene young Eric and his friend Philip are walking around impersonating Spider-Man shooting web and swinging along the street. Andrew Garfield, the actor playing old Eric/ Jack, is Peter Parker/Spider-Man in
The Amazing Spider-Man.

Michelle:
[at Jack's photo]
Look at you, so cute!

A master class in the art of film-making


Few films wowed audiences at the 2008 Tribeca Film Festival as much as
John Crowley's "Boy A." Scipted by Mark O'Rowe from a Jonathan Trigell
novel, "Boy A" is a story-driven mystery which is carried on the
shoulders of newcomer Andrew Garfield, in a tour de force performance
that dominates the film from opening title to closing credits.

Jack Burridge is leaving prison after a 14-year sentence for a crime he
committed as a child. His mentor Terry has been working to gain his
release and help him transition into the new world in which he'll live
and work under a new identity. It's up to Jack to determine who he
wants to be, but it's up to those around him to determine whether or
not he will be allowed to do so. It's that challenge which is at the
heart of "Boy A." Andrew Garfield ("Doctor Who," "Lions for Lambs") is
frighteningly brilliant as Jack. It's his movie to make or break, and
this role is sure to be singled out as the launching pad for what is
destined to be a notable career. The viewer sees a sweet, sensitive,
puppy dog of a young man while his secret past indicates something
completely different. We wrestle with that concept as he does himself,
and it's an emotional, moving piece of work. As his counselor Terry,
Peter Mullan ("Trainspotting," "Children of Men") is the father figure
who provides a foundation for Terry's wandering existence. His attempts
to keep Jack alive and well are both heartening and heartbreaking.

"Boy A" is visually stunning. The interplay of light and shadow through
the use of diffusion filters and silhouette gave me chills. The
dramatic manipulation of white light is a seemingly simple device but
cuts to the bone. Cinematographer Rob Hardy demonstrates true artistry
with camera-work that is often a character in itself. A recurring
visual theme using tunnels, alleyways, hallways, and bridges stands out
even to the untrained eye. Paddy Cunneen's score makes it clear that
this is, at its heart, a tale of intrigue.

Told in flashback, the secrets of "Boy A" are revealed in bits and
pieces. The reality of who Jack is becomes more powerful and painful as
the film progresses. Garfield is so charismatic, and his Jack so
incredibly sympathetic, that this film easily rises to the top of those
screened at this year's festival. John Crowley's "Boy A" is a master
class in the art of film-making.