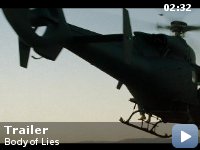 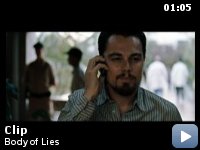 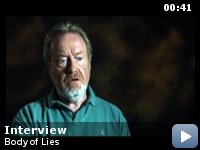 CIA agent Roger Ferris uncovers a lead on a major terrorist leader suspected to be operating out of Jordan, but while he tries to capitalize on the intelligence he has uncovered he must also be wary of the double-dealings of his boss in America.

Storyline
Roger Ferris is a CIA operative in the Middle East; Ed Hoffman is his control at Langley. Cynicism is everywhere. In Amman, Roger works with Hani Salaam, Jordan's head of security, whose only dictum is "Don't lie to me." The Americans are in pursuit of a cleric who leads a group placing bombs all over Europe. When Hani rebukes Ed's demand that Jordan allow the Americans to use one of Jordan's double agents, Roger and Ed hatch a plan to bring the cleric to them. The plan is complicated by its being a secret from Hani and by Roger's attraction to a local nurse. Satellites and cell phones, bodies and lies: modern warfare.

Taglines:
Trust no one. Deceive everyone.

Ayesha's cousins are named Yousuf and Rowley. Rowley is an unusual name for a Muslim boy and it stands out. It's possibly a nod to the FBI whistleblower of the same name.

Errors in geography:
The area around Balad, Iraq is flat, not mountainous.

Al-Saleem:
As we destroyed the bus in Sheffield last week, we will be ready and prepared for the operation in Britain. We avenge the American wars on the Muslim world.

A cut above most of its kind


The main thing I was curious about with "Body of Lies" is what sort of
film it would end up being. It could have been a post-Bourne action
thriller, a serious dramatic thriller with a political edge ("Munich",
"Syriana"), one of those intolerably dull post-9/11 films ("Lions for
Lambs"), or something like Ridley Scott's brother Tony's "Spy Game", a
movie with an interesting premise and disappointing execution.

I would argue that "Body of Lies" is the exact opposite on paper of
"Spy Game". It's a movie with a questionable, sketchy premise and damn
good execution. I'd always definitely preferred Ridley's sensibilities
and films to Tony's, and his take on a story about a CIA agent working
against agency politics is definitely superior as well, although a
very, very large amount of my preference for "Body of Lies" comes from
the script by "The Departed" scribe William Monahan. "Body of Lies"
bizarrely manages to work as both a hugely entertaining, nifty action
thriller and as a socially/politically-conscious drama. I can't believe
I'm about to say this, but it really does go from "Syriana" to "The
Bourne Identity" in a second, and does so without feeling ridiculous,
contrived, or silly. It just somehow pulls it off, and I'm crediting
Monahan with most of this success although Scott certainly handles the
shifts in tone extremely well.

All you should know about the story going in is that DiCaprio plays
Roger Ferris, a CIA field agent in an important position in the middle
east division, just below the leader of the division Ed Hoffman (played
by Russell Crowe), a snarky, racist, and mostly unlikeable man who
leads the missions remotely through his laptop and cellphone. Ferris
uncovers a lead on a major terrorist leader potentially operating out
of Jordan, and chooses to act on it, involving Jordanian intelligence
leader Hani Salam, played brilliantly by Mark Strong. His performance
is just the right side of slightly hammy, and works wonderfully well.
There are twists and turns and it's a lot of fun.

Now here's where I'm going to start sounding really bizarre: I know I
just said it was a lot of fun, but there's a good amount of substance
here and a good deal to be learned about middle-eastern politics
(having lived there for many years, I can assure you that this film
works as a primer on the mindset and cultural feel of the locations it
is set in, and of the political system there. Its observations on
Jordanian intelligence in particular are very much spot-on. There are
scenes where the film gets really dark and serious, and they completely
work as well. In particular, for a white American screenwriter's work,
this is incredibly perceptive and understanding of how Jordanians act
and feel. Something like "Rendition" from last year, while generally
just not a good film, was also hopelessly inaccurate on just about
everything. There was no work there, just a message the filmmaker
wanted to send. With "Body of Lies", every second feels (and is)
authentic and real (outside, perhaps, of some of the details of the
espionage aspects, although the writer of the book it was based on was
CIA), and there's even some cultural jokes completely in Arabic,
untranslated on screen, that basically no non-Arabs will understand.
It's a remarkably vivid, real portrait, and considering Hollywood's
past of portraying Arabs generally in a 'dem Ayrabs, we America' way,
which completely ignored the basic dress and attitude of real Arabs,
something like this is refreshing.

The movie isn't perfect, and there's a key scene at the end which feels
very didactic and heavy-handed (although judging by the
twentysomethings who left the theater talking about how cool one of the
torture scenes was, even a message delivered this bluntly just isn't
getting into their thick skulls), but it somehow gets away with being
an enjoyable genre piece and a genuinely thought-provoking and
perceptive film (but not one which focuses on these elements to the
point of being overbearing), with actual understanding of mid-eastern
politics and culture, wonderfully involving characters (including the
refreshingly non-sexual love interest Aisha, played by Iranian actress
Golshifteh Farahani), and even a surprising sense of humor. "Body of
Lies" is most definitely a cut above most in its (overall quite poor)
sub-genre, and one of the biggest surprises of the year.