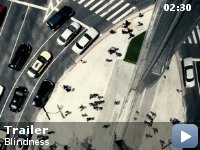 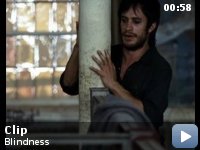 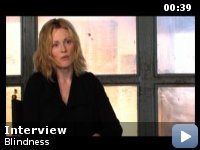 A city is ravaged by an epidemic of instant "white blindness". Those first afflicted are quarantined…

Storyline
A city is ravaged by an epidemic of instant "white blindness". Those first afflicted are quarantined by the authorities in an abandoned mental hospital where the newly created "society of the blind" quickly breaks down. Criminals and the physically powerful prey upon the weak, hoarding the meager food rations and committing horrific acts. There is, however, one eyewitness to the nightmare. A woman whose sight is unaffected by the plague follows her afflicted husband to quarantine. There, keeping her sight a secret, she guides seven strangers who have become, in essence, a family. She leads them out of quarantine and onto the ravaged streets of the city, which has seen all vestiges of civilization crumble.

Mother of the Boy

To prepare for the film, the actors, extras and crew participated in "blind camps." They were blindfolded, taken in a car to an unknown location, and left in the middle of the street. However, there were always somebody there to guide them. Despite this, the director claimed that someone would always breakdown.

Factual errors:
When the first blind man arrives home, he says he lives on the 14th floor. After his wife arrives you can see some trees through the kitchen window. Those trees should not be there.

An eye for an eye, and soon the whole world is blind


It's very easy to understand why people hate this movie.

Blindness is directed by acclaimed film-maker Fernando Meirelles, with
a story based on a novel by award-winning writer Jose Saramago. It
stars Julianne Moore and Gael Garcia Bernal. What could go wrong?

Well, this is one the most depressing movies I've seen in recent years.

Don't be fooled, the genre of this movie is Horror, albeit done in an
ultra-realistic way, much like the Brazilian movie wave of the 70/80's
– gritty, violent, dirty, and ultimately hopeless.

However it's not a horror movie in the common sense. It's not scary
because it has ugly monsters. It's not frightening because there is a
lot of gore and blood. What freaks me (and others) out over this movie,
is that it tells a story that could happen, and actually, is happening.
If one can't see that, then one is as blind as the characters in the
film.

The movie is technically brilliant, with great acting and top-notch
effects. The story takes place in a non-specific city, but some of it
was clearly filmed in São Paulo. The movie poses the question, "what if
suddenly everyone in the world became blind"? This is a practical
question as much as a metaphorical one.

I don't think this movie can be "enjoyed". The violence is suggested
rather than seen (which IMHO makes it scarier). It can, however, be
appreciated, as its shocking nature is nothing more than a wake-up call
for humanity.

Having said that, Meirelles took a huge risk (the novel was considered
to be un-filmable) with this film, and the result was a lynch-mob
reaction from both critics and audiences. I wonder how this will impact
Meirelles' future works.

I will dare to suggest that, if this had been filmed in Spanish or
Portuguese, it might have been hailed as a cult movie. As it is, it's
too alienating for audiences that are used to happy endings and
fake-violence, or people who watch movies solely to pass the time.

This one is for 'hardcore' movie fans – don't watch it if you're
depressed or sad. And it offers the viewers very little in the way of
comfort. However, it's so well-executed and disturbing, that you can't
help but agree that their goal was reached. Unfortunately, the
marketing and the names involved with 'Blindness' misled many viewers
who otherwise would never dream of watching this.

It's not a perfect film by any means, though. The music (specially in
one crucial scene) just feels out of place sometimes. And If you can't
picture yourself as a blind person, some things may not make a lot of
sense, too. There is a scene however in which one of the characters
sings a very popular song in a slightly different way – one you are not
likely to forget anytime soon.

Approach with caution, and preferrably, alone. You don't want to lose
any friends or potential dates. But I also think that to miss out on
this movie is like losing a chance to watch one of the most
thought-provoking films of this year.