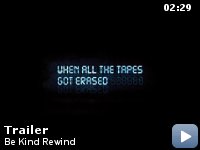 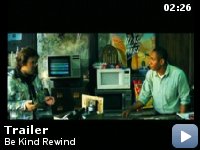 Two bumbling store clerks inadvertently erase the footage from all of the tapes in their video rental store. In order to keep the business running, they re-shoot every film in the store with their own camera, with a budget of zero dollars.

Storyline
In Passaic, NJ, Elroy Fletcher runs a video store in a condemned building he claims was the birthplace of Fats Waller. Fletcher goes on a Waller centennial trip, leaving his foster son Mike in charge of the store. Mike's peculiar friend Jerry tries to sabotage a power station and nearly electrocutes himself, getting magnetized in the process. He inadvertently erases every tape in the store. Mike and Jerry hatch an plan to hide the disaster by making a homemade "Ghostbusters" to rent to a woman whom Fletcher will be phoning to check on them. Soon, with help, their homemade versions of films develop a cult following. Will this new business save the store and the building? What about Fats?

Taglines:
Sometimes the best movies are the ones we make up.

Kirsten Dunst was in talks to play the role that became Alma but she dropped out for unknown reasons.

Errors made by characters (possibly deliberate errors by the filmmakers):
The wrong form of "every day" is used on the side of the video store. "Everyday" (one word) means ordinary, while "every day" (two words) means diurnal, which is what should have been used.

Miss Falewicz:
The past belongs to us, and we can change it.

Fun film, though script is lacking


Michel Gondry is a very talented filmmaker especially when it comes to
visuals. His music videos and films go beyond simple video marvels into
a world of simple visual trickery. This is something Gondry is very
good at. Furthermore, he has a do it yourself mantra when it comes to
filmaking. He's not into the marvels of CGI. He's more into what you
can do without it.

But it takes a little more than visual trickery to make a film a
success. Be Kind Rewind is a prime example. The film starts off well
enough. Mos Def helps run a video store owned by Danny Glover's
character. The store is probably one of the last remaining stores
catering to VHS. Jack Black is Mos Def's left of center friend who
works at an electrical plant. Through some plan to sabotage the plant,
he becomes magnetic, erasing all the tapes.

Our heroes are forced to re-record the movies and do it through a
process called "sweding," producing 10-15 minute versions of the film,
using a wide array of do it yourself techniques that Gondry himself has
utilized in his work. An example is a simple trick where filming
through a fan makes the film look old. All of this is fun. The way the
guys try to truncate the film's stories into a little time or their
lack of knowledge regarding some films like Driving Miss Daisy. the
crude effects are fun and are prime examples of why we love Michel
Gondry.

The downside to the film is the script, penned by Gondry. Clearly, the
film is built around the sweded films. But I was starting to think that
watching the sweded films would've been more fun than watching Be Kind
Rewind itself. Gondry never fully fleshes out his characters or
resolves some of the subplots. The visuals are fun, but when Gondry's
forced to wrap up the movie, it becomes a little sporadic and we start
to realize the the film doesn't go much beyond its rich concept.

There is something great to take away from this film. And while I have
some reservations about the film, my recommendation for the film is
based on Gondry's filmaking vision. That is to say, there is clearly a
joy of filmaking associated with Gondry that will have me continue to
look forward to his work. If you're not sure what I mean, take a look
at his promotional materials or at his other short films. The man loves
filmaking and has fun with this movie. However, I'd recommend he build
an alliance with some good screenwriters that would help his visions
become fully realized, and not just good natured diversions, as this
film is.

TagsNJUSA
The Hottie & the Nottie
Welcome to the Sticks