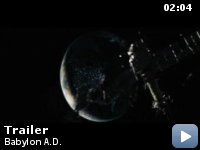 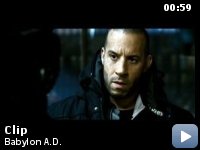 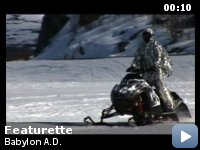 Veteran-turned-mercenary Toorop takes the high-risk job of escorting a woman from Russia to America. Little does he know that she is host to an organism that a cult wants to harvest in order to produce a genetically modified Messiah.

Storyline
In a near future, the mercenary Toorop is hired by the powerful criminal Gorsky to take a woman named Aurora from a Noelite Convent in Central Asia to New York. In return, he will receive a large amount of money and a clear passport. Toorop joins Aurora and her guardian Sister Rebeka as they cross the dangerous Russian landscape chased by mercenaries that also want Aurora. On their journey, Toorop discovers that Aurora has special abilities and once in New York, they see on the news that the Noelite Convent has just been bombed. When Aurora discloses that she is a virgin and pregnant with twins, Toorop realizes that there is something sinister behind his mission and that he and Sister Rebeka are not part of Gorsky's plans.

The film had to be bailed out by the studio's insurance company, after running over-budget and falling significantly behind schedule.

Revealing mistakes:
Toorop drives through the border town, and the kids start throwing rocks. Once all the kids stop, you can clearly see one of the 'rocks' bounce a few times, because the rocks are rubber.

Toorop:
[voice-over]
Save the planet. Whenever I've read that bumper sticker I've had to laugh. Save the planet. What for? And for what, ourselves? What about God, can He help us? I don't think so. God gave us what we have to see how we use it. Shit, rats in a cage would have done it better. Life's a bitch and then you die – bumper sticker philosophy. Yeah, right. Sometimes, you get a second chance.


I like Vin Diesel. Even if he is not flavour of the month anymore, if
he ever was, I make no apologies for that statement. I have a story I
would like to share.

I have no idea if the autograph is genuine. It may well have been
signed by Vin Diesel, or maybe it was just signed by somebody in Vin
Diesel's office. I will never know. Do you know what? I don't care.
Somebody went to the effort to send that autograph to me for that I
think that Vin is sound, is cool and I give him much respect.

I just wish that Vin appeared in better movies. This brings us to
"Babylon A.D.".

Bad things. "Babylon A.D." is a mess. There is evidence of extensive
tampering with and shortening of the movie in the editing suite. (I
read one rumour that 70 minutes had been cut from the movie, although
the Director claims that this was more like 15 minutes.) The ending is
absolutely awful and apparently not the one that the Director intended.

Such a shame. I have always felt that Vin Diesel could have been the
new Stallone, but bad choices have turned him into new Van Damme.

Still, "Babylon A.D." is currently the #2 film at the US Box Office, so
what do I know?