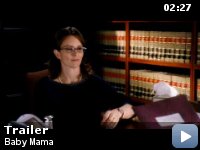 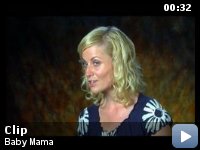 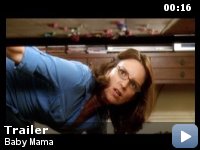 A successful, single businesswoman who dreams of having a baby discovers she is infertile and hires a working class woman to be her unlikely surrogate.

Storyline
Successful and single businesswoman Kate Holbrook has long put her career ahead of a personal life. Now 37, she's finally determined to have a kid on her own. But her plan is thrown a curve ball after she discovers she has only a million-to-one chance of getting pregnant. Undaunted, the driven Kate allows South Philly working girl Angie Ostrowiski to become her unlikely surrogate. Simple enough … After learning from the steely head of their surrogacy center that Angie is pregnant, Kate goes into precision nesting mode: reading childcare books, baby-proofing the apartment and researching top pre-schools. But the executive's well-organized strategy is turned upside down when her Baby Mama shows up at her doorstep with no place to live. An unstoppable force meets an immovable object as structured Kate tries to turn vibrant Angie into the perfect expectant mom. In a battle of wills…

Taglines:
Would You Pay Her… To Have Your Baby?

Greg Kinnear's Juice Shop was originally a tea shop, but was changed because juice is funnier.

Continuity:
In the scene where Kate and Angie go clubbing, the shrug sweater over Kate's dress keeps changing position. Her shoulders are visible, then covered by the sweater. This continues throughout the scene, but is especially visible when Angie throws the garbage can on Scott's car.

Scott:
Oh, it's great! We just bought a house in Bucks county. I'm still doing stuff for Doctors Without Borders. Recently we took in some hurricane Katrina dogs. Oh, and I was in a bicycle accident that made my penis bigger.


When I first saw the trailer for Baby Mama, I just thought this movie
was going to be a total disaster, it didn't look funny and like another
typical chick flick. But my friends wanted to see it, so we saw it
opening weekend, and actually I was surprised, I did like a lot better
than what I was expecting. Baby Mama is something that looks like from
the Lifetime Network, but it's all good, it has some really funny
moments and was just cute. Amy Poehler and Tina Fey are two very funny
women from Saturday Night Live, they also did Mean Girls together and
made their characters an absolute joy to watch, so seeing them as the
leads in this film was going to be an interesting turn. Tina Fey
definitely has a lot of talent not only as a writer, but as an actress,
she made her character believable and as neuritic as she was, she was
still likable. Amy Poehler made her character a little too SNL at
times, but these girls made the movie enjoyable and a fun flick to
watch for the afternoon.

Kate is a single and successful woman who seems to have it all in life,
but one thing she wants so bad is a baby. But one problem, her uterus
isn't liked by her doctor, in other words, she has a one in a million
chance of getting pregnant. After adoption woes and sperm donor
failures, she decides to get a sergeant mother who will get pregnant
and give her a child. She meets white trash couple, Angie and Carl.
Angie moves into Kate's apartment after her break up with Carl, so this
"odd couple" has to teach each other some new moves in life.

Baby Mama is actually worth the watch, I was very impressed with how
much I liked it, like I said, from the trailer, it doesn't seem like a
good movie, but when you watch it, you get the laughs and the smiles
that the movie promises. It is a chick flick, warning to people who
have a strong hatred for them, but I'm not a fan of chick flicks, and
you know what? I thought that this was just a fun movie that if you let
go and even enjoy the predictability, you'll find yourself loving Baby
Mama.

TagsUSA
The Objective
Then She Found Me