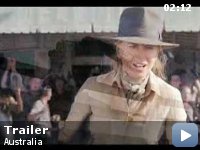 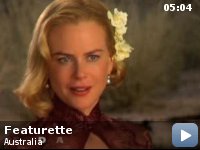 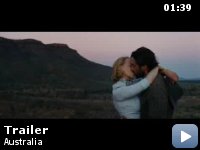 Set in northern Australia before World War II, an English aristocrat who inherits a sprawling ranch reluctantly pacts with a stock-man in order to protect her new property from a takeover plot. As the pair drive 2,000 head of cattle over unforgiving landscape, they experience the bombing of Darwin, Australia, by Japanese forces firsthand.

Storyline
In northern Australia at the beginning of World War II, an English aristocrat inherits a cattle station the size of Maryland. When English cattle barons plot to take her land, she reluctantly joins forces with a rough-hewn stock-man to drive 2,000 head of cattle across hundreds of miles of the country's most unforgiving land, only to still face the bombing of Darwin, Australia, by the Japanese forces that had attacked Pearl Harbor only months earlier.

No fewer than 15 babies were born to cast and crew, one being Nicole Kidman's daughter, during the course of the very long production.

Factual errors:
There is character in the filmed named Administrator Allsop (played by Barry Otto), who is the Monarch's representative in the Northern Territory. However, at the time the actual Administrator was in fact named Aubrey Abbott, who served from 1937 to 1946.

Drover:
We're not really used to…

Lady Sarah Ashley:
A woman? I suppose you think I should be back in Darwin, at the church fête or a lady's whatever you call it. Well I will have you know, I am as capable as any man.

Drover:
Guests. We're not used to guests is what I was about to say but now that you mention it I happen to quite like the women of the outback.

After all of the publicity and the hype that preceded it, Baz Luhrmann's larger than life and highly entertaining epic, Australia, has finally arrived.


Here is a film that works on multiple levels; thrilling action
adventure, detailed period piece, moving romance, stirring war movie,
and it also continues the resurrection of the western.

As a result, the sum of its vast parts make for a long running film
(165 min), yet every minute is filled to the brim with captivating
detail.

What Luhrmann does well with Australia is tap into the majestic allure
of the outback, and amplifies it. This is no surprise, since he is a
master at approaching his material with a fantastical bent, creating
truly memorable and often surreal sequences, which Australia provides
plenty.

Aboriginal culture and its relationship with nature, in particular,
have fuelled Luhrmann's imaginative vision. The heart and soul of
Australia lies within the mythology and customs of Australia's
indigenous people, and their often tumultuous relationship with
European settlers.

This is made flesh in the form of young Nullah, a mixed race Aboriginal
boy on the run from the authorities, who want to forcibly remove him
from his home, and place him in a "civilised" environment. He is played
by Brandon Walters, who is impressive in his debut performance.

With Nullah playing narrator, the viewer is introduced to Lady Sarah
Ashley (Nicole Kidman), an English aristocrat who inherits her late
husband's cattle station, which is located in the Northern Australian
city of Darwin. Caught in a rivalry with fellow beef exporter King
Carney (Bryan Brown), Lady Ashley enlists the services of The Drover
(Hugh Jackman) to herd 1500 head of cattle in order to fulfil a
contract with the Australian Army.

Both Kidman and Jackman – two exceptionally gifted actors who, with the
help of Australia, have overcome recent rocky patches in their careers
– provide noteworthy performances and believable on screen chemistry.

Tall, pale, and thin, Kidman plays regal very well, courting an in full
force stiff upper lip, that gives way to several funny moments, while
trying to break out of her icy exterior. Of particular mention is her
vain attempt to herd cattle; and a woeful rendition of "Somewhere over
the Rainbow" to a clearly amused Walters.

Supporting roles are superbly fulfilled by top shelf Australian talent:
Bryan Brown is effective yet given a disappointing limited amount of
screen time; Jack Thompson seems to be gleefully enjoying his role as
an alcoholic lawyer; and a scene stealing David Wenham is all evil
smirks and nasty attitude as the films key villain.

Yet the most impressive character in Australia has to be its awe
inspiring and vibrant landscape, which is captured magnificently by
cinematographer Mandy Walker.

Unfortunately, the films use of artificial visual effects does clash
with the natural beauty that the outback projects.

Australia is a film which clearly parades its influences on screen.
References to The African Queen, Gone with the Wind, and Big Country
are particularly notable.

Yet it is no mere carbon copy of the films from decades past. Rather,
Australia is an enchanting throwback to an era of film-making which
strived to entertain its audiences with dazzling spectacle and
melodrama, coupled with a historical snapshot of circa early 1940s
Darwin, and all of the beauty and ugliness that comes with it.