A Summer in Genoa 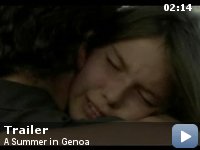 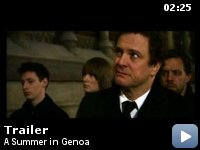 A man moves his two daughters to Italy after their mother dies in a car accident, in order to revitalize their lives. Genova changes all three of them as the youngest daughter starts to see the ghost of her mother, while the older one discovers her sexuality.

Storyline
How do children respond to tragedy? On an icy road near Chicago, Marianne dies in a crash, leaving Joe and their daughters, Kelly, about 16, and Mary, about 9. That summer, a friend from Joe's graduate student days, 20 years before, arranges a teaching job for him in Genoa. When they arrive in June, Joe starts teaching and the girls have the summer before school starts: Kelly quickly falls in with youths her age; their club and beach life leads to sexual awakening. Mary, burdened by guilt for her mother's death, is solitary. The girls take piano lessons, Mary draws, and she also sees and talks to her mother. Joe asks them, "Are you okay?", but is that enough?

Factual errors:
On their way from the airport, when they pass in the car in front of a fresco of Saint George fighting against the dragon, Ms. Keener says that Saint George is the Saint Patron of Genova. Now, it's true that Saint George has a strong link to the history of the city: the banner bears the cross of Saint George, in the middle ages the Bank which funded expeditions overseas (by the way it's the building that shows the fresco seen in the movie) was named after Saint George etc. but the Patron of Genova, since XIII century, is John the Baptist and he came to be after Genoese crusaders (First crusade) brought back from Holy Land his ashes, which are still kept in the Cathedral.


I was taken by the melancholy and the beauty of the film and if this
wasn't enough, Colin Firth's performance! His best since "Apartment
Zero" and that is saying something. Not a single false move in a film
that could very easily become a simple tearjerker. Colin as a dad who
takes care of his young daughters after the tragic death of his wife is
simply extraordinary. The humanity of his character, flaws and all, is
immediately recognisable. The film is filled with an emotional form of
suspense that makes the experience utterly unnerving at times. Genova,
the city, is photographed with real gusto. The narrow "vicoli" create a
sense of dislocation that underlines in the most poetic way the new
roads that Colin and his daughters are, not merely finding, but forging
for themselves. A delightful surprise.