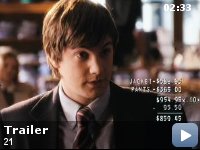 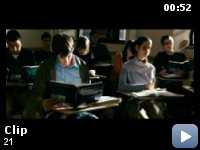 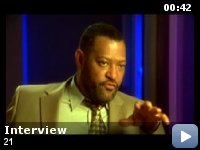 "21" is the fact-based story about six MIT students who were trained to become experts in card counting and subsequently took Vegas casinos for millions in winnings.

Storyline
Ben Campbell is a young, highly intelligent, student at M.I.T. in Boston who strives to succeed. Wanting a scholarship to transfer to Harvard School of Medicine with the desire to become a doctor, Ben learns that he cannot afford the $300,000 for the four to five years of schooling as he comes from a poor, working-class background. But one evening, Ben is introduced by his unorthodox math professor Micky Rosa into a small but secretive club of five. Students Jill, Choi, Kianna, and Fisher, who are being trained by Professor Rosa of the skill of card counting at blackjack. Intrigued by the desire to make money, Ben joins his new friends on secret weekend trips to Las Vegas where, using their skills of code talk and hand signals, they have Ben make hundreds of thousands of dollars in winning blackjack at casino after casino. Ben only wants to make enough money for the tuition to Harvard and then back out…

Taglines:
Inspired by the true story of five students who changed the game forever.

The printed source code for the robot is from NOAA's National Geodetic Survey GPS Toolbox.

Crew or equipment visible:
When Ben leaves the Hard Rock Hotel after their first night in Vegas, the shadow of the Cameraman and Camera on the dolly are visible on the hotel front and security guards in the background.

Micky Rosa:
Choi, you made five grand last night. So would you stop stealing 9 cent pens and everything you can get your hands on from the maid's cart. It's embarrassing!


Slick camera work and some good performances rev up the technical
quality of this fact-based story about a 21 year old MIT student named
Ben Campbell (Jim Sturgess) who, along with his brainy Ivy League
chums, travels to Vegas to win tons of money at the blackjack tables.
Their sleazy math professor, Micky Rosa (Kevin Spacey), leads the
group. Rosa has devised an elaborate and conspiratorial card counting
scheme that consists of code words and hand gestures. With all that
preparation, the group's scheme does work … for a while. And in the
process, the shy, cautious Ben, who only wants the money for tuition
costs, morphs into his alter ego, a person quite unlike his original
self.


The film's pace starts off leisurely, then alternates between
fast-paced Vegas casino action and periods of downtime wherein Ben and
his girlfriend, fellow conspirator Jill (Kate Bosworth), talk shop and
take in the high life. The story does have a villain, but it may not be
who you think it is.

The script's dialogue is snappy and hip, and contains minimal tech
jargon. "Variable change" is one such math term, and it has thematic
implications toward the end, as the story twists and turns in ways that
may surprise you. And "winner winner, chicken dinner" is the group's
lingo for gambling success.

Production design is realistic and lavish; this is a big budget film.
Color cinematography, by DP Russell Carpenter, is polished and slick.
There are lots of elaborate camera dissolves and close-ups. The best
parts of the film are the close-ups of the characters at the blackjack
tables. Film editing coincides with plot pacing, and ranges from slow
to super fast. Acting is all-around good. Kevin Spacey gives his usual
topnotch acting job; Sturgess and Bosworth also give fine performances.

It's not a perfect film. Background music was noisy and rather
nondescript for my taste. And I could have wished for more card
playing, and less time spent on Ben's college buddies in the first Act;
the result is that the film gets off to a slow start. Still, the script
is credible, and stays close to its book source "Bringing Down The
House" by Ben Mezrich.

Thematically relevant in today's world of greed and materialism, "21"
is a terrific film, one that has greater import than other films,
because the events in "21" really happened. And the fine performances
and polished visuals enhance the overall look and feel, to create a
film that is both engaging and entertaining.