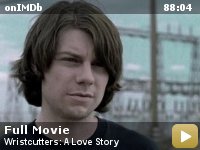 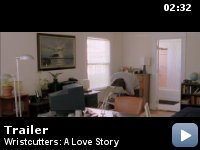 A film set in a strange afterlife way station that has been reserved for people who have committed suicide.

Storyline
Despondent over his breakup with Desiree, Zia slashes his wrists and goes to an afterlife peopled by suicides, a high-desert landscape dotted by old tires, burned-out cars, and abandoned sofas. He gets a job in a pizza joint. By chance, Zia learns that Desiree offed herself a few months after he did, and she's looking for him. He sets off with Eugene (an electrocuted Russian rocker) to find her, and they pick up a hitchhiker, Mikal, who's looking for the People in Charge, believing she's there by mistake. They're soon at the camp of Kneller, where casual miracles proliferate. They hear rumors of a miraculous king. Can Zia find Desiree? Then what? Where there's death there's hope.

Taglines:
An Offbeat Comedy, A Love Story, A Road Movie – But Everybody's Dead

The scene in which Mikal asks to drive the car was filmed at the entrance to Carlsbad Caverns in Carlsbad, New Mexico.

Continuity:
Around the 25:35 mark in the movie, the car pulls over to the right shoulder to stop for the hitchhiker. Yet in the next scene, when the driver puts it into reverse, it is back on the right lane of the road, not in the shoulder. After the car stops and picks up the hitchhiker, it again changes position about a minute later, and its tires are shown over the shoulder line, although it had stopped earlier in the middle of the lane.

Zia:
Listen, you know what? Forget Desiree. I got another reason for you to go.

Eugene:
Give it shot.

Zia:
You got anything better to do?

"Wristcutters: A Love Story" is a very strange yet unique look at what a person would do in the name of love.


Wristcutters" is about guy named Zia (Patrick Fugit) who commits
suicide after his girlfriend breaks up with him. Once he does, he
doesn't die but goes to a place where others who have committed suicide
live as well. It's a bizarre tale of love, friendship, and the
afterlife told through the eyes of director Goran Dukic and is based on
the short story "Kneller's Happy Campers" by Etgar Keret. A funny,
strange but very original film ensues…

I had the pleasure of being able see this film at the Philadelphia Film
Festival earlier tonight and I was glad that I got the opportunity to
see such an original and creative film which so few will ever see.
While this movie may actually be too dark or weird for some audiences,
I personally loved it. It's been a long time since I have seen a
romantic comedy that is this unique and this original. The plot for the
movie is so bizarre that your eyes and brain are glued to the screen
the entire time.

This movie puts a whole new spin on the idea of a romantic comedy and
does it flawlessly. All the characters seem to connect as they interact
with each other. The movie seems to be a mix of the movie "Interstate
60" and the work of writer Hunter S Thompson. The movie at times is
very dark and odd but it only adds to the originality and creative
minds behind the film.

When watching this film, just sit back and enjoy the ride. This film
takes you to a world that you have never seen before. Who would ever
think you would see a movie about a world that exists only to those who
have committed suicide? And the funniest thing is it's the same thing
as our world but a few minor differences. This is a movie that relies
on imagination, something we as adults seem to forget to use anymore.
This movie challenges Hollywood to take risks and go beyond the typical
storyline and into something more creative and out of the ordinary.

The acting in this film is very solid. Patrick Fugit who I feel is
always underrated as an actor really does a great job in this film. I
mean you think after movies like "Almost Famous" and "Saved!" his
career would have taken off but oddly enough it hasn't yet. Regardless
of his career, I think he did a great job with the material given to
him. Also Shannyn Sossamon who played Mikal did a great job as well.
Again I think she is another actress who has potential. She hasn't had
a great breakout performance as of yet but I feel she has the potential
to be big and when she does land that breakout role, she will be. Shea
Whigham who played Eugene was very amusing. I enjoyed him as the crazy
sidekick to Zia. And finally just because I think the guy is a riot and
since half the audience started to laugh when they saw him appear on
screen I must give credit to Will Arnett (GOB from Arrested
Development) who appeared on screen for way to short of a role in my
opinion. What made his role stand out was the fact that so many people
recognized him as GOB on "Arrested Development" which as he came on
screen near the end of the film, half the theater laughed and clapped.
There are several others I haven't mentioned here but they all did a
fine job as well.

Director and writer Goran Dukic did a great job on this film especially
since it was his first feature film. As the audience talked with Mr.
Dukic during the Q&A I found out that a lot of this film was taken
directly from the short story but the way he brought the film alive was
amazing. I honestly think this is probably one of the most original and
creative films I have seen in the theater in the last year or so. And
Mr. Dukic does a fine job directing this film and capturing this
bizarre world.

In conclusion, if you're a fan of dark comedies I highly recommend this
film. If you like movies that dare to be different I recommend you see
this film. Honestly, I don't know the target audience for this film but
it's definitely a must for those who want to see something original and
different from the norm. It's a fine first film from director and
writer Goran Dukic and it puts a new spin on the romantic comedy genre
and all the things we will do for love. I would have to say it's
probably the second best film I seen all year maybe not for being
powerful or moving but for being really original and creative.

MovieManMenzel's final rating for "Wristcutters: A Love Story" is a
9/10. A must see for those who love creative and dark stories or like
movies that go beyond the norm.