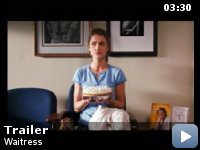 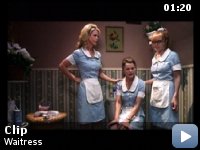 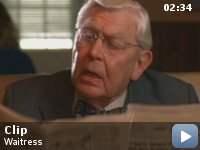 Jenna is a pregnant, unhappily married waitress in the deep south. She meets a newcomer to her town and falls into an unlikely relationship as a last attempt at happiness.

Storyline
Jenna is unhappily married, squirreling away money, and hoping to win a pie-baking contest so, with the prize money, she'll have enough cash to leave her husband Earl. She finds herself pregnant, which throws her plans awry. She bakes phenomenal pies at Joe's diner, listens to old Joe's wisdom, tolerates her sour boss Cal, is friends with Dawn and Becky (her fellow waitresses), and finds a mutual attraction with the new doctor in town. As the pregnancy advances, life with Earl seems less tolerable, a way out less clear, and the affair with the doctor complicated by his marriage. What options does a waitress have?

Anachronisms:
Assuming this movie takes place in the present, the nurse's uniform in the delivery room is a least twenty years out of date. RN's are no longer required to wear all white nor to wear their nursing school cap. Even the most die-hard ones gave up the white and caps by the mid 80's.

Jenna:
Dear Baby, I hope someday somebody wants to hold you for 20 minutes straight and that's all they do. They don't pull away. They don't look at your face. They don't try to kiss you. All they do is wrap you up in their arms and hold on tight, without an ounce of selfishness to it.


Waitress is a great, funny movie starring Keri Russell as a small-town
waitress who discovers that she's pregnant just as she's planning to
leave her jealous, controlling husband. The typical Hollywood approach
for a movie like this would be to film it in ultra-serious "movie of
the week" mode, but writer/director/actor Adrienne Shelly chose to tell
her story in an extremely stylized, almost fairy-tale style. The
stylized dialogue, super-sharp photography and primary-color palette
even reminded me of the movies of Joel & Ethan Coen at times, but in
the end, this movie packs an emotional punch that the Coen brothers
have rarely achieved. It also features a brilliant (and brilliantly
human) performance by Andy Griffith as the horny old geezer who owns
the diner where Russell works.


This movie has a good chance at achieving a Little Miss Sunshine-style
breakout this year. It's funny, quirky and honestly touching. Waitress
stands as a fine legacy for Adrienne Shelly, but if things had been
different, it could have been the movie that launched her into the
mainstream instead of her swan song.