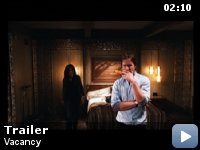 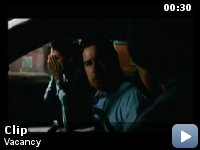 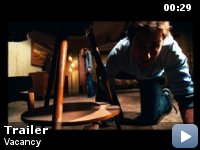 A young married couple becomes stranded at an isolated motel and finds hidden video cameras in their room. They realize that unless they escape, they'll be the next victims of a snuff film

Storyline
David and Amy Fox find themselves stranded in the middle of nowhere when their car breaks down. Luckily, they come across a motel with a TV to entertain them during their overnight stay. However, there's something very strange and familiar about the Grade-Z slasher movies that the motel broadcasts for its guests' enjoyment. They all appear to be filmed in the very same room they occupy! Realizing that they are trapped in their room with hidden cameras now aimed at them filming their every move, David and Amy desperately find a means of escape through locked doors, crawlspaces and underground tunnels before they too become the newest stars of the mystery filmmaker's next cult classic!

Taglines:
How can you escape…if they can see everything?

Sarah Jessica Parker was originally selected for the film, but dropped out and was replaced by Kate Beckinsale.

Incorrectly regarded as goofs:
In one of the snuff films it is shown that the killers were banging a girl's head against the lights hanging directly above the bed. But in the room in which Amy and David are staying the lights are hanging by the side of the bed. It's possible that this was filmed in one of the other rooms, however.

David Fox:
[after swerving while driving]
Son of a bitch!

Amy Fox:
What are you doing?

David Fox:
It was a goddamn raccoon in the middle of the road!

Amy Fox:
Well, better to kill us than get a little roadkill on the car, huh?

David Fox:
Well, we're still alive. I can tell by the pissy look that you're giving me.


Amy (Kate Beckinsale) and David Fox (Luke Wilson) are returning from an
arduous family reunion, on their way to Los Angeles. On their trip they
encounter car problems and inevitably pull into a motel Norman Bates
could feel right at home at. After some awkward exchanges with the
owner, they reluctantly decide to spend the night. Upon viewing some
tasteless horror films in the room, David begins to suspect their
authenticity, and that these are actual murders taking place.
Furthermore, he is led to believe the room that these events take place
in is none other than the room they are currently residing. With this
initial set-up, Vacancy wastes no time launching the audience into an
engaging, gripping, and somewhat macabre story while borrowing
sparingly from Alfred Hitchcock's Psycho and managing to side step many
land mines other horror films fail to see.


Vacancy has both positives and negatives going for it, however the
negatives don't seem to affect the narrative as frequently as in other
films. The first thought that came to my mind was its running time. At
eighty five minutes, the film may move at too brisk of a pace for some,
and at times it feels like it should be part of a short horror film
festival, rather than a stand alone feature film. The clichés are very
apparent as well-the broken-down car, the mysterious stranger, the
out-of-range cell-phone, and the creepy hotel are included, but rather
than using them as a crutch for a poor script, the film seems to
celebrate their existence. It epitomizes all horror films where the
main characters are stranded, encounter mysterious people or creepy
locations. The film also fails to successfully flush out the "snuff"
film aspect that was so heavily advertised and anticipated. The screen
time of these films is very limited and the focus on them is brief.
They serve as an fundamental set-up, but after their initial
appearance, they fall out of sight and out of mind.

What makes the film much more successful than the average "teen
slasher" horror film is, ironically, the absence of teens in the film.
In recent years the most successful horror films, in my opinion, like
The Sixth Sense, What Lies Beneath, Stir of Echoes, and Hide and Seek
all revolve around families, and in particular, the relationships
between adults. In Vacancy, Amy and David are a married couple one
argument away from a divorce and unlike an amorous, oblivious, teenage
couple about to become mincemeat for an axe-murderer, the tension
between David and Amy puts them on edge throughout the whole film and
translates to tension in the audience while the film builds its
suspense. The build of the film also differs from the main pattern set
by modern "slasher" films. Winding like a key, the tension never lets
down, and unlike the ups and downs of "slasher" films where there are
multiple apexes of horror, there is a ratchet effect in Vacancy, where
there is no relief and each scene is built upon the previous one. The
other very obvious asset to the film is its relative lack of violence
compared to most other modern horror films. In recent years, films such
as the Saw series, Hostel, The Texas Chainsaw Massacre, and The Hills
Have Eyes have lazily resorted to the shock factor to scare their
audience rather than rely on the old saying "It's not the bang that is
scary, but rather, the anticipation to the bang." That's not to say
that the film isn't violent free, there is some definite violence
involved, but in comparison to other films it seems, dare I say,
minimal or practical.

The references to Hitchcock's Psycho are refreshingly flattering rather
than annoying. In Disturbia, a recent loose remake of Hitchcock's Rear
Window, the similarities become annoying and the film loses its
intrigue. In Vacancy, the nods to Psycho are very slight. The Pinewood
Motel itself is the most obvious example which, like the Bates Motel,
is in serious need of redecorating. The beginning credits also throw
back to Psycho with its vertical bars violently moving around to
forceful string instruments. There are similar references to Halloween
as well, but the one thing the film lacks is the characters' emotional
dilemma and their feelings of guilt involved in their situation. In
Psycho it is Marion's (Janet Leigh) moral dilemma over stealing the
money, and in Halloween it is Laurie's (Jamie Lee Curtis) feelings of
social inequity. Amy and David do not share this external baggage-their
troubled relationship is seemingly repaired through this trial that
they are put through and not manifested by a killer such as Michael
Myers or Norman Bates. There is no name given to whoever pursues them
and there is no correlation that can be drawn between the characters
and their tormentors.

All in all Vacancy hits a few high points and is a smart enough film to
stay clear of areas where previous horror movies have failed (horrible
twist endings such as in Identity). Vacancy has a decent build of
suspense, the exclusion of gratuitous violence helps, and the
characters are more likable than those of the average horror movie. The
letdown is that the film doesn't take any substantial risks. It follows
a very linear path, with no deviations, and stays almost exclusively at
the motel. It is a film that will entertain, but won't allow for too
much out of the box thinking.