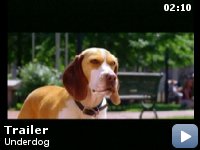 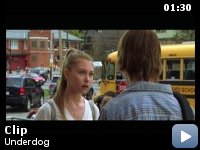 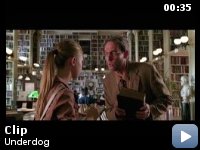 A lab accident gives a hound named Shoeshine some serious superpowers — a secret that the dog eventually shares with the young boy who becomes his owner and friend.

Storyline
A bomb-sniffing beagle is fired from the mayor's office for a faux pas. That night a mad scientist dognaps him and injects him with an elixir. The dog escapes, but now has superpowers. He's adopted by a security guard – an ex-cop, who's a widower with a moody teen son, Jack. The boy discovers that the dog, named Shoeshine by dad, has super powers, but it's their little secret. While Underdog saves people in distress, the mad scientist and his underling continue their plot to catch him and take over the city. There's also a girl Jack likes who has a dog that Shoeshine takes a shine to. Will every dog have his day?

Taglines:
There's no need to fear. Underdog is here.

"Bar Sinister" is a heraldic term – a bar slanting to the left on a coat of arms signifying "bastard".

Anachronisms:
Early in the movie, when the mailman is taunting Shoeshine, he is seen driving an older style jeep DJ5. All post offices now use a Grumman LLV which was put into service in 1987.

Shoeshine Boy:
There's no need for fright. Underdog can bite.

The Things We Do For Love


When I first became a father about 5.5 years ago, I was prepared for
many of the sacrifices I'd have to make. I knew I'd have to change
diapers and take them to swimming lessons and attend many a freezing
Santa Claus parade, but I wasn't ready for the kind of sacrifice I made
last night. This, in my humble opinion, is cruel and unusual
punishment.


Underdog is bad. It's not quite Karate Dog bad, but it makes The Shaggy
Dog feel like Pulp Fiction. If Underdog were a television show, I'd
recommend flipping on by. Not even the presence of Puddy and the voice
of Banky Edwards can save it. Bow. Wow.

It was also just about the best 80 minutes I've ever enjoyed. James was
seated to the right of me and Michelle to the left, and I spent more
time watching their reaction to this talking, flying mutt than watching
the screen. At 5 and 3 years old, they were the target audience, and
this movie nailed the target. There's a scene where Underdog belches
loudly in another dogs face and Michelle thought it was the funniest
scene ever captured on film. When Underdog was flying into outer space,
James was literally at the edge of his seat, mesmerized. The kids
absolutely loved Underdog, and that's why I was there. That's what last
night was all about.

Unless you're accompanying someone under the age of ten, you have no
business wasting a second of your life watching this brutal film. But
if you are looking to kill 80 minutes with your four year old, I won't
judge. I had a blast.