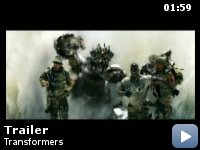 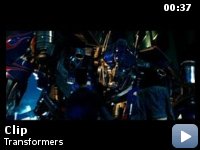 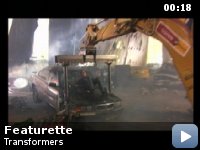 An ancient struggle reerupts on Earth between two extraterrestrial clans, the heroic Autobots and the evil Decepticons, with a clue to the ultimate power held by a young teenager.

Storyline
A long time ago, far away on the planet of Cybertron, a war is being waged between the noble Autobots (led by the wise Optimus Prime) and the devious Decepticons (commanded by the dreaded Megatron) for control over the Allspark, a mystical talisman that would grant unlimited power to whoever possesses it. The Autobots managed to smuggle the Allspark off the planet, but Megatron blasts off in search of it. He eventually tracks it to the planet of Earth (circa 1850), but his reckless desire for power sends him right into the Arctic Ocean, and the sheer cold forces him into a paralyzed state. His body is later found by Captain Archibald Witwicky, but before going into a comatose state Megatron uses the last of his energy to engrave into the Captain's glasses a map showing the location of the Allspark, and to send a transmission to Cybertron. Megatron is then carried away aboard the Captain's ship…

Taglines:
Their war. Our world.

The rock band Mute Math composed a rock version of the
The Transformers theme song, but there was no suitable point to place it in the film.

Factual errors:
The Ranger and the Airborne patch are never worn together, as shown on Lennox's fatigues. A person can be Airborne and Ranger QUALIFIED at the same time, but they can never be PART of both at the same time.

Optimus Prime:
Before time began, there was the Cube. We know not where it comes from, only that it holds the power to create worlds and fill them with life. That is how our race was born. For a time, we lived in harmony. But like all great power, some wanted it for good…
[…]

I went to see an advance screening of "Transformers" tonight, and I
walked out of the theater in disbelief. Not because the movie wasn't
what I thought it would be, but on the contrary, it was so much more
than I had ever expected.

Going into the theater, I was expecting a corny kids movie with decent
acting and a fantastic, unrealistic plot. Needless to say the plot was
indeed fantastic and unrealistic, but it was all kept in check with
solid acting and the most incredible display of visual effects that I
have EVER seen. Most…actually almost all of the acting credit in this
movie has to go to Shia LaBeouf, whom is quickly becoming a Hollywood
star after recently giving an excellent performance in the thriller
"Disturbia". It was another great performance from Shia in
"Transformers", with his clever wit still ever present.

However, the most impressive aspect of "Transformers" was most
certainly the special effects. The robot vs. robot fight scenes were,
in a word, remarkable. I didn't know that modern day special effects
could produce images so fantastic AND realistic, to the point where the
robots didn't seem computer generated at all. The interaction between
human and robot was beautiful and flawless. It seemed like the actors
were actually interacting with real, 50 foot tall robots during the
movie. "Transformers" will, without a doubt, be the pioneer for future
cinematic visual effects.

The plot may have been a little unrealistic and some of the acting a
little sketchy at times, but it does not in any way override what was
truly an entertaining movie. The plot simply stayed true as best it
could to the cartoon story without becoming overly ridiculous or corny.
When I say unrealistic, that does not mean "cartoon-corny". In fact, I
would recommend that ANYONE over the age of 13 go to see this movie. I
promise you won't be disappointed.