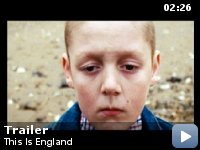 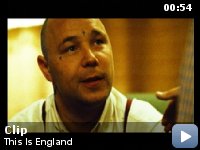 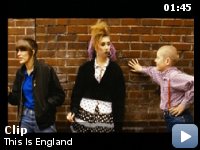 A story about a troubled boy growing up in England, set in 1983. He comes across a few skinheads on his way home from school, after a fight. They become his new best friends even like family. Based on experiences of director Shane Meadows.

Storyline
This is England: Mods, New Romantics, and Skinheads are the major youth sub-cultures of this very English summer of 1983 and young 12-year-old Shaun is left wandering aimlessly alone and lost during the start of his school holidays, until his chance meeting with Woody and his fun and friendly Skinhead pack. Finding a new lease of life; girls, parties, Ben Sherman shirts, Doc Martin boots and shaven hairstyles young Shaun is welcomed, life during this summer holiday has got a whole lot better. That is until Combo arrives on the scene bitter, dangerous, racist, militant and psychotic life for young Shaun has just approached his first major crossroads. This is England is a look back at the early eighties of British working-class life through the eyes of young Shaun and his new gang, and dealing with the bitterness of outside influences such as racism and xenophobia, of mass unemployment and the fall out of the Falkland's War; Thatcher's Britain: Did we ever have it so good…

Taglines:
Run with the crowd, stand alone, you decide.

The poster on the wall (in the room in which Shaun has his hair-cut and puts on his new shirt) features six classic bands of the British Ska and 2Tone movement, and is from 1981's live vinyl album Dance Craze: The Best of British Ska…Live! The bands on the poster are Bad Manners, The Beat, The Bodysnatchers, Madness, The Selecter and The Specials.

Anachronisms:
Blockbusters, the popular 80s game-show the gang are seen to be watching didn't actually debut on TV until 29 August 1983 – over a month after the events in which the film is set.

Smell:
I loved when you gave me that cake, that was sweet. Did you make it yourself?

Smell:
You didn't make it yourself, did you?

This Is… The Best British Film For A Long Time


I was lucky enough to attend the first UK screening of Shane Meadows'
latest offering, THIS IS ENGLAND, last Tuesday at the London Film
Festival. Having been a fan of Meadows' work since seeing
TWENTYFOURSEVEN in 1998, I have anticipated each of his new films with
excitement and great interest. Meadows' films defy categorisation and
always exceed expectation, as anyone who has seen A ROOM FOR ROMEO
BRASS or DEAD MAN'S SHOES will attest. THIS IS ENGLAND had a lot to
live up to…


Set during the summer of 1983, THIS IS ENGLAND is the story of Shaun
(Thomas Turgoose); a precocious twelve-year-oldcoming to terms with the
death of his father. Shaun is soon inducted into a group of local
skinheads; a fun loving bunch who spend days committing petty vandalism
and listening to ska records. Although much younger than the other
members of the group, Shaun endears himself upon them with his sheer
determination and defiance, and is quickly embraced as their mascot.
However, the frivolity and naivety comes to an abrupt conclusion when
ex-member Combo (Steven Graham) is released from a spell in prison.
Combo soon causes a rift within the group and becomes the catalyst for
them becoming a militant, racist force.

Anyone familiar with Meadows' earlier work will notice many parallels
between this and A ROOM FOR ROMEO BRASS; the film is told from a
child's perspective and the corruption of youth/innocence is an
underlining theme. Like ROMEO BRASS, THIS IS ENGLAND manages to balance
the light-hearted and often hilarious, with menace and tension that's
excruciating to endure. Many British films that attempt dramedy falter
because one or the other/both is unconvincing, but Meadows manages to
combine comedy and drama seamlessly; the laughs come thick and fact but
the jolts come harder than a kick to the head.

Typically for a Meadows film, THIS IS ENGLAND is exceptionally well
written with some infectious dialogue and fully-fleshed characters,
though one of the film's stand-out attributes is that of Danny Cohen's
cinematography. Being a film set during the 80s, its look plays a
significant part in the audience buying into the film. Many 80s-set
films have been betrayed by garish lighting and ultimately end up
looking like contemporary people parading around in 20-year-old
clothing. Cohen's photography really manages to encapsulate the bleak
feeling that was evident of the time, and is both gritty and dour. THIS
IS ENGLAND is a film without polished aesthetics and one that has the
raw visual style that's not be seen since the films of Alan Clarke
(SCUM, MADE IN Britain, THE FIRM).

In addition to the film's look, Meadow's has raided the vaults for a
whole host of archive footage leading thirty-something viewers on a
trip down memory lane. The credit sequence alone features footage from
Roland Rat, the Falklands and Knight Rider; As a child of the 80s, I
literally sat in the cinema beaming – It's a great hook into a
wonderful film.

As assured as Meadows' writing and direction is, the film benefits
greatly from its ensemble cast. Predominantly made up of teenagers, the
cast of THIS IS ENGLAND excel beyond belief, without one putting a foot
wrong. A ROOM FOR ROMEO BRASS' Andrew Shim is superb as Milky, as is
Stephen Graham as Combo – who gives a terrific and complex performance.
However, THIS IS ENGLAND belongs to Thomas "Tommo" Tugoose – for a
débutant child actor he is astonishing and effortlessly conveys the
array of mixed emotions the material requires.

In conclusion, THIS IS ENGLAND is essential viewing for anyone with
even a passing interest in film. Once again Meadows has set a precedent
for British filmmakers and has eclipsed many of his contemporaries.
THIS IS ENGLAND may not make for comfortable viewing but it is cinema
at its best.