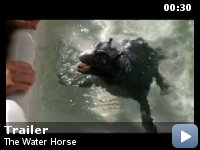 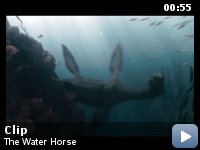 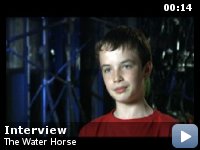 A lonely boy discovers a mysterious egg that hatches a sea creature of Scottish legend.

Storyline
A lonely boy discovers a mysterious egg that hatches a sea creature of Scottish legend.

Taglines:
How Do You Keep A Secret This Big?

The title, 'The Water Horse', is a reference to the kelpie, a malevolent beast of Celtic lore that would disguise itself as a horse to lure unsuspecting victims to it. Once the unfortunate soul had mounted the kelpie, it would drag him or her down to their watery death.

Anachronisms:
In the workshop, Angus has a toy ship which is clearly seen and is the SS United States – but this ship was not built until 1952.

Female Tourist:
What is that?

Male Tourist:
It's a famous picture of the monster. But it's fake.

Female Tourist:
How do you know it's fake? It looks real.

Male Tourist:
Of course it's fake. Everyone knows that.

Old Angus:
Well, if you'd like to know the real truth.


I saw the trailer and the making of The Water Horse: Legend of the
Deep, I don't know, something about this film just captured me. It just
seemed like a really creative story and looked like a great family
film. So, I decided to go ahead and check it out today and I have to
say that it really did live up to my expectations, it was a cute film
for the whole family to enjoy. It's a different version of Free Willy I
think, lol, sounds crazy, I know, but I think you'll agree when you see
it. It's definitely a tear jerker, but one of the better films I've
seen in a little while in the theater. It was made very well and I'm
surprised it hasn't gotten more notice, but like I said, I think I just
saw something special in the story. We haven't had a Lochness monster
movie, all we know is the infamous picture that has never been prove to
be fake or real, and The Water Horse: Legend of the Deep tells us the
story behind that picture.

Agnus is a young and lonely boy in Scotland, his father who he was very
close with has just gone off into WWII to fight. His home has just been
taken over by English soldiers to fight off the German's. His family
has lost something too, life and laughter. But when Agnus comes across
what looks like a strange rock, is actually an egg left by an Water
Horse, the rarest of all creatures, there can only be one in the world
at a time. But he takes care of the baby who is water bound, while
protecting him from his mom and the soldiers. But when the water horse,
he named Crusoe, has grown too big, he and a family friend put him in
the Lochness Lake where he is spotted and is now known as the infamous
Lochness Monster.

The Water Horse: Legend of the Deep is truly and honestly a good film.
It has such a magical touch like The Secret Garden, where it's a
serious story, but it's for the family. I thought it was very well
made, the visual effects are very good and not over done, which was
great, because obviously the Lochness monster is going to be CGI, but
they made it look so real, and so lovable, lol, like I said, I did cry,
it's a tear jerker. The characters are terrific, they really found
terrific actors for the roles. Alex Etel does a beautiful break out
performance as Angus and was so charming. I would highly recommend The
Water Horse: Legend of the Deep, it's one of the best family films I
have seen in a while.