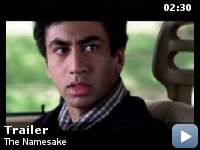 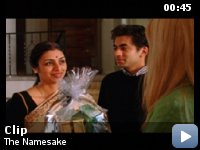 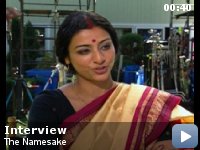 American-born Gogol, the son of Indian immigrants, wants to fit in among his fellow New Yorkers, despite his family's unwillingness to let go of their traditional ways.

Storyline
While traveling by train to visit his grandfather in Jamshedpur, Calcutta born, Bengali-speaking Ashoke Ganguli meets with fellow-traveler, Ghosh, who impresses upon him to travel, while Ashoke is deep into a book authored by Nicholai Gogol. The train meets with an accident, and after recuperating, Ashoke re-locates to America, settles down, returns home in 1977 to get married to aspiring singer, Ashima, and returns home to New York. Shortly thereafter they become parents of a boy, who they initially name Gogol, and a few years later both give birth to Sonia. The family then buy their own house in the suburbs and travel to India for the first time after their marriage. The second time they travel to India is when Gogol and Sonia are in their late teens, and after a memorable visit to Kolkata and then to the Taj Mahal, they return home. Gogol falls in love with Maxine Ratliff and moves in with her family…

Taglines:
The greatest journeys are the ones that bring you home.

The novel's author (Jhumpa Lahiri) and much of her extended family were used in party/funeral scenes for the family in the U.S. because Mira Nair stayed at Lahiri's home and met much of her family. She thought they had a look she was trying to achieve, and that they were lovely people.

Factual errors:
When the Ganguli family visits Calcutta in 1977 one of the advertisements on the streets is for the Calcutta based newspaper "Telegraph". The Telegraph was established in 1982.

Ashoke Ganguli:
Aray Baba, the camera! It is in the car. All this with no picture, huh? You just have to remember it then. Will you remember this day Gogol?

Gogol:
How long do you I to remember it?

Ashoke Ganguli:
[laughing]
Remember it always. Remember that you and I made this journey and went together to a place where there was nowhere left to go.


I saw "The Namesake" at the 22nd October screening at the London Film
Festival. Mira Nair introduced the film, along with Nitin Sawhney, who
wrote the score.

I admit that I loved the book, and therefore have been looking forward
to this film for a while. As a second generation Bengali Brit who was
born in India and went to university in the US, I know something about
what it means to feel displaced, to be a stranger in a strange land,
though I have never felt like an immigrant. I also have the Bengali
dilemma of having two names. So the book has a lot of resonance for me.

Fortunately the film does full justice to Jhumpa Lahiri's novel.
Cramming a story spanning three decades into two hours without making
it feel rushed or contrived takes some doing, and Mira Nair paces it
beautifully. The cinematography, the editing (juxtaposing Calcutta and
New York), and even the colours of the opening credits are all spot on.

The cast are by and large, superb. Kal Penn does really well as the
central character, Gogol. Anyone who has seen him in Harold & Kumar and
Van Wilder: Party Liaison may have had reservations about a comic actor
(albeit talented) playing this part, but he portrays the character as a
confused, vulnerable, and multi-layered young man who ultimately learns
to become comfortable in his own skin.

But perhaps the main reason why this story appeals to me to so much is
the similarity between the experiences of his parents Ashok and Ashima
and what I imagine it must have been like for my own parents when they
came to England. Both Irfan Khan and Tabu are excellent. They bring a
mix of loneliness, hope and pathos to their roles, people who cannot
let go of their past but are prepared to sacrifice everything for their
future. Their innate ordinariness is what makes their characters so
sympathetic and believable.

Much like Monsoon Wedding, this is a visual and lyrical film. It is an
essay on home, and on going home, not the physical place, but the state
of mind.