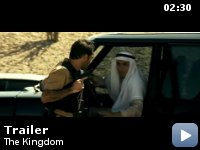 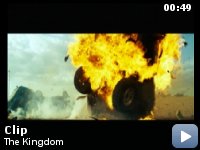 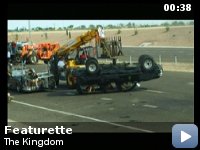 A team of U.S. government agents is sent to investigate the bombing of an American facility in the Middle East.

Storyline
After a terrorist attack to an American housing compound in Riyadh, Saudi Arabia, where families and the spy Francis Manner are murdered, FBI agent Ronald Fleury blackmails the South Arabian consul to get five days of investigation in the location. He travels with agent Grant Sykes, Janet Mayes and Adam Leavitt to revenge their friend and try to find the responsible for the bombing. The agents find all sorts of difficulties in their investigation, but they are supported by Colonel Faris Al Ghazi that advises the team how to act in a hostile environment.

Taglines:
Under fire. Under pressure. Out of time.

The end of the movie dedicates it to Thomas Aguilar, Lance Gunnin and Nick Papac, all crew members who died during production. Thomas Aguilar (Tom Aguilar, prop maker) died one week after being admitted to the hospital for stomach pain and subsequently discovering he had prostate cancer. Lance Gunnin (construction worker) was killed in a motorcycle accident on his way to the set and Nick Papac (prop master) died in an on-set collision between his Gator all-terrain vehicle and an SUV.

Continuity:
In the scene where the father with the missing fingers, pulls his weapon and is shot several times in the chest, but when the little girl runs over to him and lays in his arms, the bullet holes are gone and so is the blood.

Narrator #1:
After capturing most of the Arabian Peninsula with the help of the Wahhabi Islamic warriors, Ibn Saud establishes the Kingdom of Saudi Arabia.


If there's one flaw plaguing Peter Berg's The Kingdom, it's that it
tries to be all things to all people. OK, maybe not all things as it
definitely doesn't try the romance angle. That's not to say The Kingdom
isn't a terrific film, because it is. However, it should have been
decided at the outset to make this movie either a political or action
thriller, and gone with one or the other.


Matthew Michael Carnahan's script starts out hitting all the right
action beats as it unfolds with a vicious terrorist attack on a Saudi
compound housing employees of an American oil company (the movie draws
inspiration from the 2003 compound bombing in Riyadh). From there the
movie almost threatens to get bogged down as it shifts focus to the
political machinations both hindering and enabling a joint Saudi/FBI
investigation. Fortunately, Berg pulls the film out of this quagmire
that threatens to put the breaks on the movie almost as surely as the
political attempts to nix the joint investigation.

With the political jabber out of the way, The Kingdom gets down to the
meat of the script, shifting the Saudi investigation into high gear and
refusing to take its foot off the accelerator.

The movie deserves full marks for refusing to dumb down its story and
make the Saudis appear as little more than window dressing to a big
screen American shoot-'em-up. While Jamie Foxx, Jennifer Garner, Chris
Cooper and Jason Bateman all get top billing, the real star of this
story is Ashraf Barhom who plays Saudi police Col. Al-Ghazi, a man
dedicated to his profession, with an acute sense of fair play, protocol
and justice. Al-Ghazi, who was at the scene of the initial attack on
the compound, initially plays the role of hamstrung go-between
relegated to babysitting and restricting the movements of the FBI at
the urging of higher-ups. However, thanks to a fortuitous face-to-face
between the American "guests" and a Saudi Prince, Al-Ghazi is given
free reign to lead the US investigators as they try to uncover the
mastermind behind the attack.

From there, the audience is treated to a top notch story that nicely
touches on everything from culture clashes, forensic revelations,
kidnapping, religious doctrine, and the self perpetuation of hate, all
of which culminates in a final half hour of riveting, vicious, blood
spattering action.

I said The Kingdom suffered from one flaw? On second thought, make that
two. It's also yet another victim of the hand-held cameraman suffering
from Delirium Tremens, complete with blurry and shaky shots that rarely
allow the viewer to actually focus on the images being played out. One
day Hollywood will learn that this type of cinematography just doesn't
cut it. Sadly, this is not that day. That said however, The Kingdom
delivers a smart, taught, evenly balanced thriller that easily shapes
up as a heavyweight in this year's run for the Oscar.

TagsFBI
The Edge of Heaven
The Heartbreak Kid