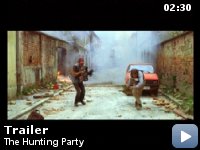 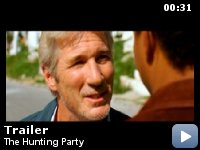 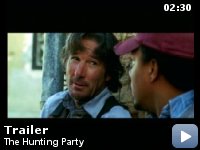 A young journalist, a seasoned cameraman and a discredited war correspondent embark on an unauthorized mission to find the no…

Storyline
A young journalist, a seasoned cameraman and a discredited war correspondent embark on an unauthorized mission to find the no. 1 war criminal in Bosnia; they find themselves in serious jeopardy when they are mistaken as a CIA hit squad and their target decides to come after them.

Taglines:
How can they find the world's most wanted war criminal when the C.I.A. can't? [by actually looking]

The book named ''A Short History of the Bosnian Conflict'' which was thrown away in the bar scene, is a fake prop one.

Incorrectly regarded as goofs:
The UN mission ended in 20 December 1995 when NATO took over (IFOR/SFOR). In 2000 there should have been SFOR flags instead of the UN flags, SFOR patches, not UN and no blue berets. Military vehicles should have their national camouflage painting and SFOR markings. This is for NATO/SFOR details. The UN Mission (UNMIBH) was still active during the time this film depicts and the UNMIBH personnel and equipment are accurate – specifically the blue berets and UN vehicles for the UN International Police Task Force personnel in Foca.

Title Card:
Only the most ridiculous parts of this story are true.


Based on a true story of a trio of Journalists looking for a war
criminal in the former Yugoslavia. The Original group included Jon
Krakauer, in the movie we have Terrence Howard and Richard Gere. Where
originally it started as a bunch of journalists getting drunk and
deciding to go out and find the bad guys, here we have Gere as a washed
up TV reporter convincing his old camera man and a network executive
(who got the job because of nepotism) that he can get an interview with
"the Fox" if they are willing to go along with him. They go and things
instantly begin to go side ways as nothing is as it seems and no one
believes they aren't with the CIA. Not to put too fine a point on it I
really liked this film a great deal. Its witty intelligent with lots of
likable characters and a real sense of both humor and reality.Its
probably three quarters of one of the most enjoyable films of the year
(even with the nastiness.) What can I say I'm a sucker for great buddy
films and Terrence Howard and Richard Gere have an ease when together
that makes you certain that they have been friends for decades. Its
magical. If there is a problem with the film its that the film kind of
loses steam toward the end. Somewhere the need for an "ending" kind of
gets in the way of things and the film begins to be a bit less…I
don't know, fun. Don't get me wrong its still better than many other
recent films, but its just disappointing that things have to be "neat".
Of course the pre-final credits explanation of whats real and what
isn't a scream. See this movie, thats all I have to say. See it and go
with its vibe and I think you'll have a good time.


And forgive me for being spotty about things since I'm trying not to
say too much since not knowing what happens is part of the joy.