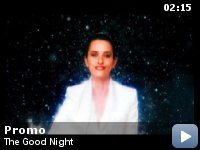 A former pop star who now writes commercial jingles for a living experiences a mid-life crisis.

Storyline
Gary Shaller is at a crossroads in his life: his job is going nowhere, his wife, Dora, drives him crazy, and he passed his thirtieth birthday four years ago. Add to that his best friend Paul seems to become more successful every time he breathes. Gary is feeling depressed and dejected… until he meets Anna. She's beautiful and smart; she's sexy and funny. Best of all, she's crazy about Gary. Anna is the girl of Gary's dreams…literally. And that's the problem. Gary can only see Anna in his dream life, so he's got to find a way to carry on the most satisfying relationship of his life, in his dreams. His quest for lucid dreaming techniques introduces Gary to some crazy characters who ultimately give him a new perspective on life.

Mel:
Sometimes I wish that you could just hit the sack and never wake up. If your favorite song never ended, or your best book never closed, if the emotions mustered from these things would just go on and on, who wouldn't want to stay asleep? The guy who discovers that perpetual dream, he's my man.


I'm still not completely sure what this movie was exactly about. The
initial layer suggests a story about an insecure bloke who tries to
escape his run aground life through lucid dreaming. Real life and the
dream world coincide as he finds out that the woman he is pushing away
from his life is actually the one he wants to stay with. People trying
to dig beyond this layer have some difficulty. Not because this movie
is especially deep but simply because there's not much beyond it
period.


Do movies have to be deep or insightful? Of course they don't. But this
one to me suggested it may become that. And when it didn't, it left me
feel a bit dissatisfied.

With an interesting story nonetheless, solid acting throughout, some
great jokes and appealing visuals this movie rises well above the
average Hollywood production. What it simply lacks are some really
poignant scenes and build up towards the end. But just like the main
character Gary who never rises above himself, the movie doesn't either.
But maybe that was the whole point.

That said, there's absolutely no harm in bringing this one home for a
view.