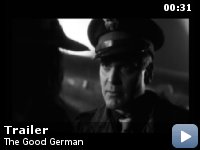 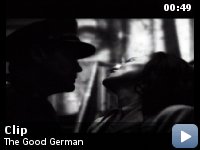 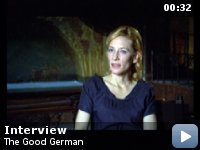 While in post-war Berlin to cover the Potsdam Conference, an American military journalist is drawn into a murder investigation which involves his former mistress and his driver.

Storyline
Berlin, July, 1945. Journalist Jake Geismer arrives to cover the Potsdam conference, issued a captain's uniform for easier passage. He also wants to find Lena, an old flame who's now a prostitute desperate to get out of Berlin. He discovers that the driver he's assigned, a cheerful down-home sadist named Corporal Tully, is Lena's keeper. When the body of a murdered man washes up in Potsdam (within the Russian sector), Jake may be the only person who wants to solve the crime: U.S. personnel are busy finding Nazis to bring to trial, the Russians and the Americans are looking for German rocket scientists, and Lena has her own secrets.

Taglines:
Every heart has its secrets, some more dangerous than others.

David Holmes composed a complete score which was rejected.

Factual errors:
In two shots you see a double-deck bus. While these existed in Berlin at the time, this one is a London bus as the entry/exit platform is on the left rather than the right.

Bernie Teitel:
This guy? Drove one of the gas vans. They'd load the Jews in back, run the exhaust inside.

Bernie Teitel:
[inhales]
By the time they got where they were going, they were already dead. Very efficient. Driving to work, he killed more people than Al Capone in all his years in Chicago. But if you asked him, he isn't a murderer, he's a truck driver. And he still thinks that.

The Good German is an ironic comment on Good Americans


This movie is an homage not only to the vocabulary of film noir , but
also to its social and political genesis. Film Noir developed after
World War II and was an outgrowth of both the cynicism that was
generated by WW II because it turned out to need another war to be the
war to end all wars…. and because of the enormous evil that World War
II revealed in contradistinction to the sunny idealism of the American
Project.


Film Noir of the 40's and 50's was a reaction to WW II, but those films
themselves were always crime stories about naive men dragged into
terrible circumstances through the lure of seductive, dangerous women.
But they were never about the war itself or anything to do with the war
itself. WWII movies were patriotic paeans to heroism like 30 Seconds
over Tokyo or the common man like A Walk in the Sun or home front
heroism like Mrs. Mininver. Indeed only Casablanca itself, as
exemplified early on by Rick's character was suffused with some of the
cynicism that we see in film noir, but the reason Casablance is beloved
is because the cynicism melts away in the the understanding that there
is something greater than one's own preservation.

What is wonderful about the Good German is that it is a Film Noir film
about the War itself and also about war in general…then and now. The
film and its concerns are not dated or meaningless, but very much of
the moment.

The film also pays visual homage to other movies of the era, from the
warm hearted cynicism of Billy Wilder's A Foreign Affair with Jean
Arthur as the parochial Congressperson (like in this film) and Marlene
Dietrich as the dangerous vamp with a dark past. Roberto Rossellini's
Germany:Year Zero, shot in postwar Berlin, shows how fear, deprivation
and terror destroy the soul as ell as the body.

The Congressman is not just a boob but a participant in the propagation
of evil and the Good American General of Beau Bridges is anything but
good. Indeed, as we know now Americans protected Nazis who could help
us in terms of confronting the next evil–Communism and Russia. And the
story they tell about the V-2 rocket is true. The Germans and Werner
van Braun used up the lives and caused the deaths of Jewish and other
POW's slave labor to create and launch them and we, in terms of the
American occupation and the incipient CIA aka the OSS, helped mass
murderers to safety.

Even the lawyer Teitel, the man researching the Nuremberg Trials, whose
sole purpose is to pursue Justice, can be compromised. Tobey Maguire
was chosen to play the vicious, venal Tully because to most American
audiences he, as Peter Parker, typifies the best of America. He is
meant to be jarring to the audience. Lena, indeed is the vamp, but
unlike old film noir like Out of the Past, she doesn't lead Jake on,
Jake misleads himself about her. She is just a desperate woman
struggling to survive.

Some would say this is a movie about moral ambiguities, but I think
it's not that ambiguous. The filmmakers have cast judgment on some of
our post war behavior and found it wanting.