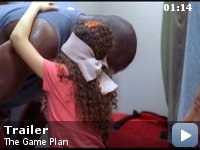 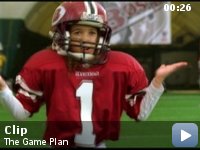 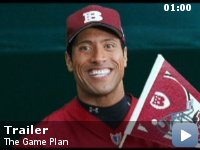 An NFL quarterback living the bachelor lifestyle discovers that he has a 8-year-old daughter from a previous relationship.

Storyline
Joe Kingman is a huge football star. He's got woman, money, and a good career. Everything is perfect for him. Then one day an 8 year old girl shows up at his door telling him that she's his daughter from a past relationship. Once he has proof that she is for a fact his, he tries but fails miserably at "parenting." From problems such as his super speedy car with no backseat, to leaving her in a bar at 3 am, he's got a lot to deal with. Eventually though, she gets him, (and his football team) wrapped around her finger. When she has a near-death experience and Joe finds out her mother died early that year, he wants her to move and live with him. Her aunt though disagrees and takes her home. Joe has to play the game of his life and when he's injured, and things don't look good for him, his daughter comes out and gets him right back on the field.

(as Dwayne "The Rock" Johnson)

Taglines:
He had the perfect game plan. There's just one little problem…

Dwayne Johnson has said that this film will be the last film in which he will be credited as "The Rock".

Continuity:
Before he does the commercial (when he has a lisp from an allergic reaction), the small logo for the team's name 'Boston' disappears for a shot, and then reappears.


We saw this tonight. It was wonderful. My husband took one look at all
the little girls seated in the theater and said, "Did you choose the
right movie?" But he laughed from start to finish, as did all the other
men in the theater.

The story is about a selfish star quarterback who plays for the Boston
Rebels NFL team. (Ah, if only it were so). He has a fabulous bachelor
pad and a bulldog. He adores Elvis and has adopted his nickname,
calling himself Joe "The King" Kingman. A wee eight year-old girl shows
up on his doorstep and says she is his daughter. This throws him off
balance to say the least.

The Rock plays the part very well. I heard a LOT of sniffles during
emotional parts. The little girl who plays his daughter is adorable.

TagsUSA
The Edge of Heaven
The Heartbreak Kid