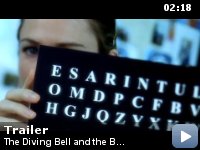 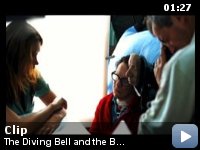 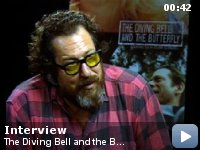 The true story of Elle editor Jean-Dominique Bauby who suffers a stroke and has to live with an almost totally paralyzed body; only his left eye isn't paralyzed.

Storyline
Elle France editor Jean-Dominique Bauby, who, in 1995 at the age of 43, suffered a stroke that paralyzed his entire body, except his left eye. Using that eye to blink out his memoir, Bauby eloquently described the aspects of his interior world, from the psychological torment of being trapped inside his body to his imagined stories from lands he'd only visited in his mind.

Almost the entire opening 40 minutes of the film are taken from Bauby's point of view.

Anachronisms:
When Jean-Dominique goes on a boat ride, a 'Speedferries' vessel can be seen in the background. Speedferries started business in 2004, years after the movie was set.

Jean-Dominique Bauby:
I decided to stop pitying myself. Other than my eye, two things aren't paralyzed, my imagination and my memory.


One of the best films in years, and in artistic cinematic terms, one of
the best films I've ever seen. That's a heavy statement to make, but
off the top of my head, I cannot think of another film that explores
the inner workings of a character so intimately and believably, while
blending cinematography, sound effects, and musical score in such
harmony — but in a fashion we (as American's at least) are not trained
to enjoy. I felt the French influence strongly cinematically and, of
course in the dialogue, but the writing and acting was so fluid it felt
like the subtitles weren't even there.

The film deals with a rare physical condition, and I was physically
there with the character from start to finish. I felt each moment as if
it were my own. That is a rare accomplishment in cinema. Julian
Schnabel directed a stellar cast. Mathieu Amalric was unusually
charming as Jean-Dominique Bauby, and Max Von Sydow was heartbreaking
as his lonely widower father. The female leads were all equally
impressive as they were beautiful. I don not mean to generalize them,
but they were all so excellent that they blend seamlessly in my mind,
in terms of performance.

Overall, this film was as pure a cinematic experience as I've witnessed
in a long time. A true artist turns out a film that is truly a piece of
art. Julian Schnabel takes his time in between films, but with work
like this, there's no need to rush. Like a good painting, one can enjoy
it for a lifetime.