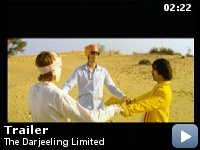 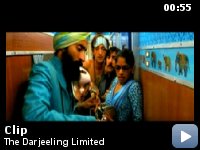 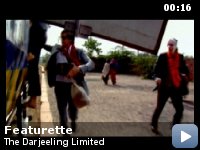 One year after their father's funeral, three brothers travel across India by train in an attempt to bond with one another.

Storyline
A year after the accidental death of their father, three drug-addicted brothers — each suffering from depression – meet for a train trip across India. Francis, the eldest, has organized it. The brothers argue, sulk, resent each other, and fight. The youngest, Jack, estranged from his girlfriend, is attracted to one of the train's attendants. Peter has left his pregnant wife at home, and he buys a venomous snake. After a few days, Francis discloses their surprising and disconcerting destination. Amid foreign surroundings, can the brothers sort out their differences? A funeral, a meditation, a hilltop ritual, and the Bengal Lancer figure in the reconciliation.

The 11 suitcases seen in the movie are created by Marc Jacobs for Louis Vuitton and they are decorated with giraffes, rhinoceros and antelopes designed by Eric Chase Anderson, the director's brother. They all have the initials JLW.

Continuity:
When Peter throws the belt at Francis in the train cabin, he has shaving lather on his face. But when Francis retaliates immediately after, the lather is gone.

The Businessman:
That's my train.

Nobody said his movies weren't difficult at times.


This is a film occupied with moments. Wonderful moments. It is not so
much concerned with mechanics of plot but for me, it never got dull.
Wes Anderson has matured in subtle ways and this film is a well crafted
blend of the personal and the pageantry – Powell and Pressburger and
Cassavetes. "The Rules of the Game" and "Husbands." "The Last Detail"
and "The River."


The "spiritual journey" is used as pretext. Some people really don't
like this. There is so much humor in watching three brothers stoned on
Indian pharmaceuticals, trying to pray and getting sidetracked by
arguments over stolen belts and confided secrets. They are flawed.
People are flawed. Audiences tend to like their characters so likable
that they are bland stereotypes. People can be privileged and
disaffected AND still be beautiful and intriguing.

In the end, this movie is a fun ride. A stroll through various
imaginative carts, occupied by compartments of colorful characters and
incidents. Wes is further interweaving his "dollhouse" aesthetic with
the real world. He is not so hung up on inventing every little thing
and I could tell he was finding faces and peripheral details just as
they were, waiting for him in India.

Nine bucks well spent for me. This guy's taking chances – some don't
work. He's trying to push the medium forward in terms of tone. Some
parts of his movies are difficult. Some people will get left behind.
But for me, someone whose watched his films grow in scope and daring, I
think he's an American treasure who may never arrive at the perfect
film, but he'll continue to integrate cinema's history in new and
exciting ways.