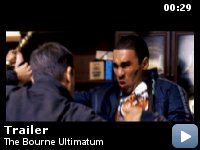 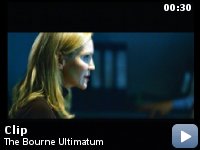 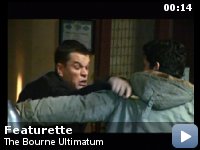 Jason Bourne dodges a ruthless CIA official and his agents from a new assassination program while searching for the origins of his life as a trained killer.

Storyline
Bourne is once again brought out of hiding, this time inadvertently by London-based reporter Simon Ross who is trying to unveil Operation Blackbriar–an upgrade to Project Treadstone–in a series of newspaper columns. Bourne sets up a meeting with Ross and realizes instantly they're being scanned. Information from the reporter stirs a new set of memories, and Bourne must finally, ultimately, uncover his dark past whilst dodging The Company's best efforts in trying to eradicate him.

Taglines:
Remember everything. Forgive nothing.

Since the opening scene of the film takes place directly after the ending of
The Bourne Supremacy, but the production gap was several months, it was now January in Moscow. This would have been too cold and so Berlin was chosen as the location of the shoot, with a Moscow set being created. The fake snow was made using paper and foam, and took an excess of 5 hours to cover the entire set. Paper and foam were used instead of real snow so there was no risk of melting.

Revealing mistakes:
When the reporter is shot at Waterloo station, during the through-the-scope footage, his head never actually make it to the crosshairs. His head approaches them but then whips back from the bullet impact before ever being framed by the crosshairs.

Perhaps One of the Greatest Motion Picture Trilogies of our Time


I don't hand out ten star ratings easily. A movie really has to impress
me, and The Bourne Ultimatum has gone far beyond that. Furthermore,
this trilogy has come together so nicely, that I believe it to be one
of the greatest motion picture trilogies of our time. Though all three
films could not be any more different from the Ludlum novels, they
still stand as a powerful landmark in cinematic achievement. The Bourne
Ultimatum made me want to cry that the series was complete, yet I could
not even attempt to stop smiling for hours.


From the moment that the opening title appeared, I knew we were in for
a ride. Paul Greengrass has done it again. Everything we love from the
previous Bourne films is here once again: the action, the dialogue, and
of course the shaky camera. However for me, that last one was never a
problem. I think it adds to the suspense.

I will be back to see this film several times before it is released on
DVD, simply because it is genius. It is a perfectly satisfying
conclusion, and should stand the test of time as a fantastic movie, and
altogether, an unforgettable trilogy.