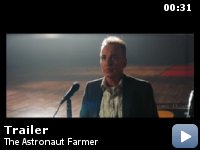 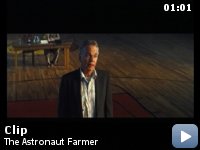 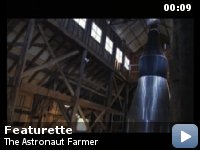 A NASA astronaut (Thornton), forced to retire years earlier so he could save his family farm, has never give up his dream of space travel and looks to build his own rocket, despite the government's threats to stop him.

Storyline
Texan Charles Farmer left the Air Force as a young man to save the family ranch when his dad died. Like most American ranchers, he owes his bank. Unlike most, he's an astrophysicist with a rocket in his barn – one he's built and wants to take into space. It's his dream. The FBI puts him under surveillance when he tries to buy rocket fuel; the FAA stalls him when he files a flight plan – it's post-9/11, after all. His wife is angry when she finds out their bank is initiating foreclosure. Charlie fears failure and decides, precipitously, to launch. Are twenty-first century American dreams just a sign of insanity? Are those who believe in dreamers only fools?

Taglines:
If we don't have our dreams, we have nothing.

FBI Agent Mathis is played by Mark Polish, who wrote the screenplay.

Factual errors:
The doctor examining Farmer's eye is looking through an otoscope – an instrument for examining the ear canal. He should be using an ophthalmoscope to look into the eyes.

Charles Farmer:
So, what do you wanna be when you get out of here?

Charles Farmer:
What do you mean, you don't know?

Charles Farmer:
Well, let me tell you something, you better know what you wanna do before somebody knows it for you. Trust me.


This is a wonderful movie. Simple and elegantly made. There are many
layers to this movie that haven't been written about on this site. More
like frustration and negativity seem to fuel these message boards.
Cynicism is alive and well. The knit-pickers can make a nice lint
blindfold if they choose not to see this movie for what it is:
entertainment. Like Spielberg, Capra and many others the Polish
brothers have arrived with a classic piece of storytelling.


The Polish Brothers have depth and while it seems it's their glossy
turn to make a Hollywood movie they continue with their wit and edge,
try and spot "The Last Supper" scene. Look for the homage to "The Right
Stuff", "Apollo 13" and "Armageddon". The son is named Shepard after
the astronaut. And I assume that the daughter is named Stanley after
Stanley Kubrick since the Grandpa is named HAL ( 2001 : Space Odyssey).
There's definitely an undertone for the hardcore Polish brothers fans.
The dialogue alone is worth the price admission. Of course you'll need
to suspend your disbelief for a story that seems so far fetched, a man
launching himself into space, although I have read of 2 rocket men who
have attempted this same idea– but every time you walk into a movie
theater you have to surrender some logic. Just the fact it's called a
"movie" should tell you something before you purchase the ticket.

It's unfortunate that most reviewers feel like victims and have a need
to share their boredom. I can imagine this movie not doing good with
men who have lost their inspiration or desire. My brother in fact
didn't like this movie because he said it wasn't possible. I don't
remember him having this much trouble with "E.T." or "Forest Gump". My
brother gave up his dream of being a writer, he now teaches high school
drama. I debated with him over the fact this movie is also metaphorical
and it's about everyones dream. That is why the rocket is named "The
Dreamer" because everyone is dreamer, or has a dream they're building.
This movie really shook up my brother and his dislike of this movie
should motivate him.

I enjoyed this movie so much. I was able to bring my dad, kids and
husband and that in itself is a triumph and the filmmakers should be
awarded for that.

9 out of 10 stars, only because I am keeping one star for my dream.