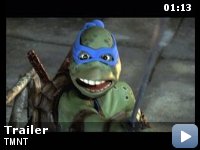 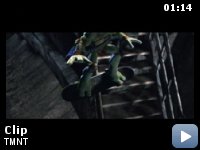 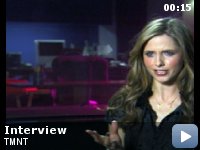 The continued adventures of the four adolescent mutated turtles gifted in the art of the ninja, as they attempt to stop a mysterious evil that threatens to end the world.

Storyline
After the defeat of their old arch nemesis, The Shredder, the Turtles are needed more than ever, but Raphael, Donatello, and Michelangelo have become lost and direction less. Leonardo has gone to Central America, on the orders of the martial arts master and father figure Master Splinter, for training. Donatello and Michelangelo have started small businesses in Leonardo's absence. Meanwhile, strange things are happening in New York City. An army of ancient creatures threatens to take over the world and the Turtles must unite again to save it.

Continuity:
While April is going through the jungle in the beginning, she sticks her sword between her backpack and her back. However, the sword keeps disappearing and reappearing, and/or keeps changing sides.

Narrator:
Four turtles. Four brothers. Genetically reborn in the sewers of New York. Named after the Renaissance masters and trained as ninjas.

Fitting Reinvention of the Franchise


i just saw a test screening of TMNT and, although i suspected it would
be good, it surpassed my predictions. i should note that i am a pretty
big fan of the old movies (1 and 2 anyway) and the old cartoon, and am
a collector of TMNT comic art posters– this may give you a perspective
on where i'm coming from before you read my review. Without giving much
away, here is what i liked(+)/disliked(-).


+ANIMATION: the biggest thing the movie has going for it is the
animation. it is miles ahead of any animated movie I've ever seen. the
level of detail is unsurpassed and completely amazing. everything from
backgrounds, characters, various surfaces and textures (including
skin), lighting and different effects (including a pivotal sequence in
the rain) absolutely blew me away.

+DESIGN: along the same lines as the animation, the general look and
design of everything was pretty cool. the turtles themselves look
different and new, as well as splinter, casey and april. their designs
fit in well with the overall look of NY city, which is dark, worn and
very impressive. the skyline was very well done. I was also
particularly impressed with the design of karai and the foot.

+CHARACTERS & RELATIONSHIPS: especially between the turtles and
splinter –and particularly raphael and leonardo– the relationships
are complex, as is traditionally the case for the franchise. in this
film they are well drawn and developed and, in the end are fulfilling
and cathartic. there are a few surprises to say the least, both within
the turtle team and also without. casey also adds to his relationship
with raph in this movie.

+SCREENPLAY/STORYLINE: The screenplay is generally okay. the tone is
about as perfect a balance you can hope for for a film trying to appeal
to the Saturday morning crowd as well as the old school, 20-something
fans. it returns to the darker, more emotional tone of the first live
action film but doesn't fail to deliver on humor (although some of it
is hit and miss– probably the result of trying to appeal to the
younger crowd). Dialogue is decent. the storyline is a bit more on the
sci-fi side than most fans of the old movies will be used to, but it
seems secondary to the development and relationships of the
characters– a good decision on the part of the filmmakers. the plot is
still interesting and fast paced, and the villains are credible.

+ACTION/FIGHT SEQUENCES: generally well done. for me, the centerpiece
of the whole movie was a climactic, rooftop fight scene in the rain.
other cool sequences include a skateboarding scene, and a huge fight
against a bunch of foot ninjas.

-HUMOR: not that it was particularly bad (although michaelangelo was
borderline annoying sometimes), but for me, there wasn't enough. i
usually associated the turtles with humor, even in their darker pieces
like the first live action film.

-SPLINTER'S VOICE: this may be sacrilege, but Mako's voice took some
getting used to. I was used to the soft-spoken whisper of past
splinters. this one is harsh and grumbly. this isn't to say its bad–
it just took some getting used to.

-CHARACTER SCREEN TIME: michaelangelo and especially donatello were
hardly in the movie. there could have been more development about their
characters (traditionally leo and raph are the focus, though) although
they do bond well as a part of the whole group. Same goes for April.
She has usually been a pivotal character in any incarnation of the
franchise, but she is minor here. Hopefully there will be future films
where these three characters will be explored in more depth.

-APRIL: not only does she have little screen time, but she isn't as
"strong" a character as she usually has been, and her fighting skills
were kind of out of the blue. besides this, her relationship with casey
was kind of flat. hopefully it will be remedied in future films, if
there are any.

-CASEY JONES: what happened to the hard-edged casey we all knew? i get
that he is supposed to be more "domestic" now, but i didn't even get a
hint of the old, violence-crazy vigilante.

-VIOLENCE: i hate for this to be another "there's not enough violence
in TMNT" discussion, but although there is a lot of fighting, it seems
they've really tried to keep the violence to a minimum, which is
understandable considering their broad market (after all, it is PG).
depending on if this film is successful, i would like to see them up
the darkness and violence a bit more (PG-13 would be cool)– although
even if it is successful, it probably wont happen. wishful thinking i
guess.

You will enjoy this film if you are a true old school fan or a fan of
the newer cartoon. If you never really liked the turtles, you probably
wont like this either. Since this is supposedly based more on the
original comics, even the comic fans should enjoy it. Although it is a
bit on the dark side, the PG rating is fitting, and isn't too much more
violent than the Saturday morning cartoon, id imagine. it is a good
action film and a good family film– adults and non-fans shouldn't be
bored. To people who balk at the idea of it being animation ("its a
cartoon!") or being PG, i'd say give it a chance– you might actually
like it. like most things, if you walk in hating it, you're gonna leave
hating it. but as a longtime fan of the turtles in most incarnations,
this film has my seal of approval. it was pretty good, and i expect to
see more.