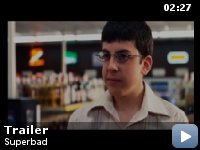 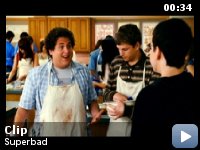 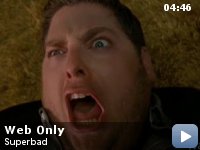 Two co-dependent high school seniors are forced to deal with separation anxiety after their plan to stage a booze-soaked party goes awry.

Storyline
Seth and Evan are best friends, inseparable, navigating the last weeks of high school. Usually shunned by the popular kids, Seth and Evan luck into an invitation to a party, and spend a long day, with the help of their nerdy friend Fogell, trying to score enough alcohol to lubricate the party and inebriate two girls, Jules and Becca, so they can kick-start their sex lives and go off to college with a summer full of experience and new skills. Their quest is complicated by Fogell's falling in with two inept cops who both slow and assist the plan. If they do get the liquor to the party, what then? Is sex the only rite of passage at hand?

(as Joseph A. Nunez)

Taglines:
Come and Get Some

The bartender in the scene with the cops and Fogell is played by Ted Haigh, the graphic artist.

Errors made by characters (possibly deliberate errors by the filmmakers):
When Evan is playing video games he comments on the use of an M16 assault rifle. The games he's playing is 'The Getaway: Black Monday', a British police game where M16s are not used.

Seth:
Hey, man, I was doing some research for next year and I think I figured out which website I wanna subscribe to. The Vag-Tastic Voyage.


I was able to catch a screening of 'Superbad' last night in NYC and I
was very pleased with the movie. I'm sure most will compare this to an
'American Pie' like comedy, but it's so much more than that. There were
some "shock value" moments, but very well done to tip the scale more to
funny than to gross.

It is a teen movie, so 'Superbad's plot is obviously basic. It's the
performances of the 3 friends (Seth, Evan, and 'McLovin' Fogell) that
really make it great. I am big Michael Cera fan thanks to the brilliant
TV series "Arrested Development", and other fans will be delighted to
see his equally hilarious performance as Evan. The movie has the
sexually driven banter and gross outs that will appeal to 'American
Pie' viewer and the smart timing and acting that will appeal to the
'Arrested Development' viewer. What was really surprising to me was the
touching (platonic) relationship that Evan and Seth have. Also,
'McLovin' Fogell, is an absolute nerdy delight.

The only negative thing I noticed that it was a bit drawn out toward
the middle, but it really picks up after. Overall it's a great time and
might just be a success at the box office. Bad teen comedies are a dime
a dozen, but 'Superbad' is a shiny golden egg!