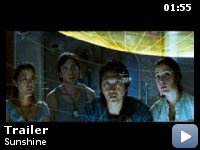 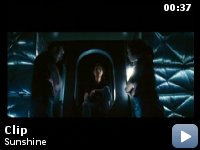 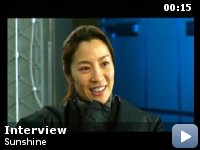 A team of astronauts are sent to re-ignite the dying sun 50 years into the future.

Storyline
50 years into the future, the Sun begins to die, and Earth is dying as a result. A team of astronauts are sent to revive the Sun – but the mission fails. Seven years later, a new team are sent to finish the mission as they are Earth's last hope.

Taglines:
50 years in the future, Earth's Sun is dying.

In the original screenplay, the Icarus payload was the same size, but was made of highly compressed dark matter (there is no mention of needing fissile material) and had the same mass as the moon, so it had its own gravity (one-sixth the Earth's normal). The science advisor pointed out problems with using a bomb that massive, so it was reduced to the mass of Manhattan. A take with the original line can be seen on the DVD, in a deleted scene.

Continuity:
Critical damage is caused to Icarus II by sunlight reflecting off a communications tower onto the structure. Yet, when Icarus II approaches Icarus I – much closer to the sun – its shield reflects sunlight onto the rear of Icarus I with no ill-effects to that ship at all.

Capa:
Our sun is dying. Mankind faces extinction. Seven years ago the Icarus project sent a mission to restart the sun but that mission was lost before it reached the star. Sixteen months ago, I, Robert Capa, and a crew of seven left earth frozen in a solar winter. Our payload a stellar bomb with a mass equivalent to Manhattan Island. Our purpose to create a star within a star.
[long pause]

Capa:
Eight astronauts strapped to the back of a bomb. My bomb. Welcome to the Icarus Two.

I'm sure many reviews will say something similar: This is two-thirds of
a great sci-fi movie. Specifically, the first two thirds. Natural
characters, intelligent dialogue, stunning visuals; I was thoroughly
immersed in this philosophical disaster movie in space. Heck, even the
moody, modern, sentimental score worked.

The central premise concerns humanity's last hope for survival: the
Icarus II (EXTREMELY dumb name for a ship travelling to the sun, if you
remember the Greek legend), whose crew must re-ignite said star with a
nuclear bomb the size of Manhattan island. It's distant future stuff,
but the filmmakers work hard at establishing plausibility. They
certainly achieve it. Impressive.

Cast-wise, it's an eclectic group. Cillian Murphy gets the starring
role, and he's good. Maybe it's just me, but he always looks slightly
psychotic – something to do with the eyes perhaps? Anyway, he's a
quirky and soulful leading man.

Nice work by Michelle Yeoh, Rose Byrne and Cliff Curtis. Not one weak
link in the multinational cast.

I thought Chris Evans stole the acting honours. Despite his character's
hot temper, he gave gravitas to every decision, and they included some
pretty big ones. He's the pragmatic member of the group; logic's on his
side, and he knows it.

The introduction of Icarus I to the second half of the story (the
previous ship that mysteriously failed) is not handled particularly
well. The crew's decision to deviate from the mission is a poor one,
and has disastrous consequences. Later on, a horror element is
introduced which is just laughable. All the filmmakers' hard work
peters out in a third act of blurry shots, shaky cams and
incomprehensible cuts.

Overall, 'Sunshine' is a real mixed bag. Director Danny Boyle and his
cast work hard to create a believable scenario. The special effects
really are special. I think the fault here lies with writer Garland,
whose third act is derivative, contrived, and not worthy of the rest of
this fine film.