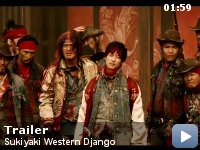 A revolver-wielding stranger crosses paths with two warring clans who are both on the hunt for a hidden treasure in a remote western town. Knowing his services are valuable to either side, he offers himself to the clan who will offer up the largest share of the wealth.

Storyline
A revolver-wielding stranger crosses paths with two warring clans who are both on the hunt for a hidden treasure in a remote western town. Knowing his services are valuable to either side, he offers himself to the clan who will offer up the largest share of the wealth.

Taglines:
An epic tale of blood, lust and greed.

When the sheriff is talking to old Quentin Tarantino's character the sheriff talks about Akira (his son) and Tarantino replies "every time I hear that name it touches my heart, what can I say, I've always been an anime otaku", (Japanese slang for a person that is a fan of anime) this is a reference to the classic anime film "Akira".

Revealing mistakes:
Right before the end-fight it starts to snow heavily for some reason, probably just for aesthetics. However, a thick blanket of snow covers everything except the chest filled with gold-nuggets. No snow seems to have fallen on the chest at all.

Ringo:
The sound of the Gion Shoja temple bells echoes the impermanence of all things; the color of the sala flowers reveals the truth that to florish is to fall. The proud do not endure, like a passing dream on a night in spring; the mighty fall at last, to be no more than dust before the wind.


If Sergio Leone's Once Upon A Time is considered an ode to the American
Western with all it's fundamental elements all packed neatly in an 3
and a half hour package of visual splendor than Takashi Miike's
Sukiyaki Western Django is an ode to the Italian Western through and
through with all the style, violence and sound that Leone brought to
the art of cinema and Sergio Corbucci used to create his most famous
work "Django". A visual feast, Miike's tribute to Corbucci's work is
the poetic equivalent of Tarantino's own tribute to the Italian Western
(and some other cult genres) Kill Bill.


Set around, in a strikingly offbeat way to, the 12th century
Heike/Genji clan wars Sukiyaki Western Django is the tale of a
mysterious gunman (played by Hideoki Ito) who comes into a nearly
deserted once prospering town now controlled by the two rival groups.
In a sense this is the Italian West going back to its roots, it's no
secret Leone was greatly inspired by the works of Akira Kurosawa with
Yojimbo serving as the blueprints for the maestro's own breakthrough
with A Fistful of Dollars. Corbucci's own Django used the same basic
premise and now Miike follows. After some flashy display of skill, and
some attempts from the two clans to persuade him to join one of them
the Gunman is persuaded by Ruriko one of the few residents who remain
to help the townspeople. A series of flashbacks reveal much of the
background and motives behind the two clans arrival. They also open the
pathway to a subplot revolving around a tragically destroyed
Genji/Heike family which plays a major part in the main plot. For those
of you who deem themselves Tarantino fans will have much to be happy
about as Tarantino plays a bad-ass, poncho-wearing gunslinger named
Ringo who introduces us to the Heike/Genji conflict and plays an
important part later on.

Style is of the essence and style is what Sukiyaki has. Though a
tribute to Django this is nevertheless pure Miike cinema, expect that
same weird humor, surreal kinetic action, with some sexual cues
(although much restrained compared to some of his previous endeavors)
he's become renowned for. It's a non stop joy ride beautifully shot,
the impressive set design and backgrounds, the great costumes and yes a
machine gun in coffin scene, pure poetry. This is not about realism, it
is not about creating a believable world but about a world that
responds to the mood that adapts according to it. The final showdown
represents a collision of two worlds, two genres it is the ultimate
fusion of samurai and western films, the duel between the gun and the
sword. There are some lovely little references only noticeable to the
more vigorous Django fans, and a truly awesome ending.

What might be my only gripe with Sukiayki is the choice of language.
Having the Japanese cast speak in broken-down English does sort of
lessen the experience not by much comparing to some of the horrendous
English dubs in some Italian Westerns but still it would have been
preferable using a Japanese language track with an optional English
one. That's to say the dialogue itself is a pastiche of noticeable
one-liner clichés, over the top silly yet listening to entire dialogues
stitched together from over used lines has a remarkably refreshing
effect on those lines.

Koji Endo composes the soundtrack, it is not his first time working
with Miike and hopefully won't be the last. For the film he combined,
the typical Morricone-sque western music with that of the Japanese
samurai flick in a modern just lightly rock adaptation.

Sukiyaki Western Django pays homage to what is now a dead genre. Dead
but not forgotten. Not by Takashi Miike who uses the tools of the
Italian Western to bring forth his own vision, his own take on a story
well known and loved and it is a true gem.

TagsJapan
The Brave One
Joshua