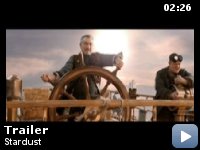 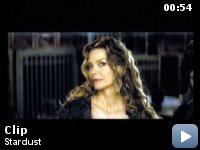 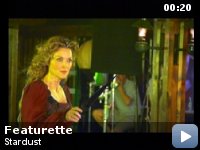 In a countryside town bordering on a magical land, a young man makes a promise to his beloved that he'll retrieve a fallen star by venturing into the magical realm.

Storyline
The passage from this world to the fantasy kingdom of Stormhold is through a breach in a wall beside an English village. In the 1800s, a boy becomes a man when he ventures through the breech in pursuit of a fallen star, to prove his love for the village beauty. The star is no lump of rock, it's a maiden, Yvaine. Tristan, the youth, is not the only one looking for her: three witches, led by Lamia, want her heart to make them young; and, the sons of the dead king of Stormhold want her because she holds a ruby that will give one of them title to the throne. Assisting Tristan are his mother, the victim of a spell, and a transvestite pirate of the skies. Will Tristan win his true love?

The letter the scientist sent to Dunstan reads, "Dear Sir, Thank you for your inquiry concerning the existence of another world beyond The Wall surrounding your village. In our opinion, the hypothetical existence of such a gateway would run contrary to all known laws of science. Subsequently – in the opinion of my esteemed colleagues and myself, the idea may be safely dismissed as merely colorful rural folklore. I thank you again for your enquiry and hope that our conclusion will enable you to proceed with your life. Yours faithfully,".

Continuity:
When Tristan wakes up in the forest at night, alarmed by a star's warning, and starts running to catch up with Primus' carriage, there are three shots showing Primus' dead brothers sleeping in the carriage. Their sleeping positions change from shot to shot. This is because a part of the scene was deleted and the rest then had to be re-shot/rearranged to match.

Previews do no justice…


Why are the previews so blah for a movie that is so awesome!! Everyone
should know what an excellent movie this is. It is engaging and funny
from moment one, original, and well-acted. I wish the movie was doing
itself as good press as it deserves!


For anyone that loved The Princess Bride, Labyrinth, and other truly
funny and original fantasy adventure, this is one of the great ones.
Robert DeNiro is hysterical. Relative newcomer Charlie Cox is an
incredible leading man. Claire Danes is fantastic as always. Michelle
Pfiefer is making quite a splash with her recent returns to the screen.
There are also a lot of wonderful moments from minor characters…even
down to facial expressions.