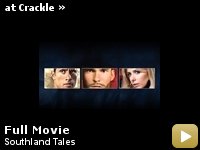 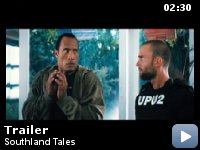 Southland Tales is an ensemble piece set in the futuristic landscape of Los Angeles on July 4, 2008…

Storyline
Southland Tales is an ensemble piece set in the futuristic landscape of Los Angeles on July 4, 2008, as it stands on the brink of social, economic and environmental disaster. Boxer Santaros is an action star who's stricken with amnesia. His life intertwines with Krysta Now, an adult film star developing her own reality television project, and Ronald Taverner, a Hermosa Beach police officer who holds the key to a vast conspiracy.

Sarah Michelle Gellar sang the song "Teen Horniness Is Not a Crime" with the help from Abbey McBride, Clarkent & Greasy Beats.

Continuity:
After Pilot Abilene (Justin Timberlake) sings "All These Things That I Have Done", Roland Tavener (Seann William Scott) is found lying on the ground. He gets up and starts to run, leaving his radio on the pavement. Later, we see Roland Tavener walking down the sidewalk with the radio back on his belt.

Private Pilot Abilene:
[narration]
In the aftermath of nuclear attacks in Texas, America found itself on the brink of anarchy.
[overlapping news reports]

Private Pilot Abilene:
The accelerated conflict in the Middle East placed significant restrictions on American access to oil. Alternative fuel sources became a lucrative commodity. Americans were transfixed by the terrorist's threat, and were willing to prevent another attack by any means necessary…
[…]

I normally recommend this film to nobody.


This is the way the world ends. Not with a whimper, but with a bang.

This is a film about all of the seemingly random events that lead up to
the end of the world. And it's also a comedy.

That says it all right there, doesn't it?

When this film ended, I ran to tell every one I could find about it.
The odd thing I found about it was that I ended nearly every one of
these conversations with the following:

It's strange to hope that a film I feel so passionately about should
not be seen by the very people I want to discuss it with. However,
that's exactly the way I feel here. This film is not for everybody; in
fact, there are only a precious few out of all of the people who see it
that will even tolerate its existence. But you know what? That really
isn't important.

Art is subjective, and no matter how many times I bother to explain a
difficult concept to somebody who hated this film, I realize that it
will never work long before the conversation ends. The problem is that
these difficult concepts are actually very simplistic: Richard Kelly
had Dwayne Johnson spoof the stereotypical, apocalyptic action-hero
throughout the film. This included over-dramatic readings of his lines,
delayed reactions and odd vocal dynamics.

What? You say that it wasn't intentional, and that it was just
Johnson's poor acting skills?

This is where the small-minded fail to grasp the most simplistic of
concepts. The great analytical film student will analyze a crooked
frame and declare the brilliance of its intent; they will say that this
intentional error supports the themes of the piece. So why does the
same not go for Southland Tales?

Each one of these already-marked actors has broken out of their shells
for this movie. The fact that everybody stereotypes them attests to
Kelly's genius in assigning them the roles; however, it also proves how
unfortunately small-minded today's modern audience has become.

Was this film a mess? Absolutely, in every sense of the word. But was
it a coherent mess? That's the real question, and I think that I can
safely say that it is. This film is nowhere near as difficult to
understand as anybody would have you believe. The concepts are
straightforward and are practically dictated to you by the narrator;
this becomes essential to the understanding of the story, as there is
just way too much going on to take in on your own. However, instead of
hindering the film, it makes these seemingly unrelated scenes string
together into a true tapestry that is worth exploring.

So, you know what? I'm going to go against my own advice and advise
anybody and everybody who reads this review to go out and see this
film. If you don't like it, don't come back to this website whining
about it, because nobody here has the tolerance to explain things to
you that you will never understand. No amount of discussion of
cinematography, lighting or the fantastically haunting score by Moby is
going to change the mind of an already jaded viewer.

But maybe, just maybe, you will like it. You'll get a chance to
experience something you're likely to rarely, if never, experience
again. Because as all of us who enjoyed the film know:

It had to be this way.