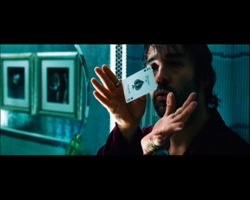 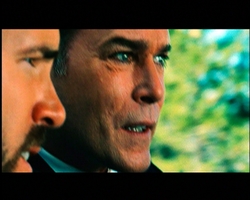 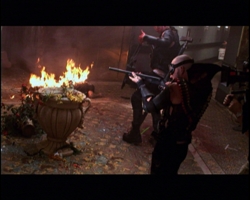 When a Las Vegas performer-turned-snitch named Buddy Israel decides to turn state's evidence and testify against the mob, it seems that a whole lot of people would like to make sure he's no longer breathing.

Storyline
Mob boss Primo Sparazza has taken out a hefty contract on Buddy "Aces" Israel, a sleazy magician who has agreed to turn state's evidence against the Vegas mob. The FBI, sensing a chance to use this small-time con to bring down big-target Sparazza, places Aces into protective custody-under the supervision of two agents dispatched to Aces' Lake Tahoe hideout. When the word of the price on Aces' head spreads into the community of ex-cons and cons-to-be, it entices bounty hunters, thugs-for-hire, deadly vixens and double-crossing mobsters to join in the hunt. With all eyes on Tahoe, this rogues' gallery collides in a comic race to hit the jackpot and rub out Aces.

Taglines:
The hit goes down January 26.

Joe Carnahan stated on the DVD commentary that the one shot of the movie is from his T.V pilot Faceless (2006). It is the shot of the ceiling light turning on in the Grandma's house.

Continuity:
Everytime they flashback to Heller being shot, the number of bullets in the driver side window changes. While this is a continuity error, it might be intentional to illustrate the confusion an inconsistency combined with how little the FBI actually knew about the incident.

Donald Carruthers:
You've got to be careful when doing your stakeouts. I did one for… I was on one for six months. I gained, like, 20, 25 pounds. You keep eating this crap…

Richard Messner:
Well, that's not my problem, though. I don't gain weight. I tried.


There is a new genre infesting our nation's movie theaters. With
apologies to Garrison Kellior, let's call it "guy noir". Films aimed
directly at the young, hip male audience. Movies that are an unholy
combination of old fashioned film noir and the modern action movie, as
directed by the class clown. They offer fast paced entertainment, great
character actors, twisty plot lines, explosions and more spent
ordinance than used in a typical week in Baghdad. Even new genres breed
clichés however and the original freshness heralded by Quentin
Tarantino's Pulp Fiction is beginning to smell the slightest bit stale.
This brings us to Smokin' Aces, a movie that isn't so smug as to be
intolerable or so brilliant as to be ground breaking. Rather it is
good, competent, workmanlike example of its genre, which is bad news
for a movie that wants to be hip and edgy.


Smokin' Aces has the requisite twisty plot. Actually it has at least
nine plots, all twisty. In fact it has so many plots the movie
dissolves into a series of incidences strung together by a smattering
of narrative glue. Aces, a card magician and mob nabob, turns federal
stoolie and a dying Godfather posts a high dollar contract on him.
Naturally every photogenic hit-man with the weekend free descends upon
Ace's casino penthouse to do the job and collect the dough. Smokin'
Aces tries hard and includes everything needed to qualify as guy noir.
It even tries to incorporate the "Tarantino Digression". That is,
extended expository flashbacks incorporated for no good reason except
that they are fun to watch. Smoking Aces can't quite pull these off as
they require a defter touch than the movie is capable of.

There aren't any real people in Smokin' Aces. All the characters are
strictly stereotypes played for effect rather than reality. Jeremy
Piven as Aces is the self loathing hop head, Alicia Keys and Georgia
Sykes are the hot lesbian hit team, Ben Afleck is the hipster bounty
hunter and so on. Everything you need to know about these guys you
learn in the first split second they are on the screen. There is no
star in Smokin' Aces. Afleck, the biggest name, has a relatively small
part and is upstaged by his hat. You might remember Chris Pine, Kevin
Durand and Maury Sterling as the Tremor brothers if only because they
were the loudest, most violent bunch in a loud violent movie. The only
actor who rises above caricature is Ray Liotta, who invests his FBI
agent with quiet dignity and a touch of pathos and in doing so sticks
out like a sore thumb. It takes a strange sort of movie for a review to
criticize the one genuinely good performance in it but Liotta just
doesn't fit.

Smokin' Aces manages to hold its whirly gig self together for the most
part. There are a few problems. It goes on too long after the climatic
blood bath wrapping up plot threads you probably didn't notice amongst
the explosions. There is a denouement where a hero, brought in from way
out in left field, makes an existential choice that is not nearly as
agonizing as the movie thinks it is because we have no emotional
investment in the fellow making it. Though the final plot twist is
prepared for and makes as much sense as anything else in the film,
still it feels flat and unsatisfying. Think of Smokin' Aces as a shaggy
dog story. It's long, involved and fun to listen to but ultimately goes
nowhere.