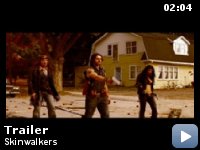 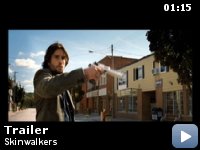 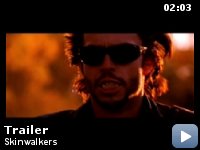 A 12 year old boy and his mother become the targets of two warring werewolf packs, each with different intentions and motives.

Storyline
In accordance with the Navajos' legend, a thirteen year-old boy will finish with the curse of the powerful Skinwalkers, a.k.a. werewolves. The half-breed boy Timothy is raised by his human mother Rachel and protected by his Skinwalkers relatives since he was born. His grandmother Nana, his uncle Jonas, his cousin Katherine, her boyfriend Adam and their friend Doak have kept the secret about his bloodline and neither Timothy nor Rachel know the tragic curse. A couple of days before Timothy's thirteenth birthday, a pack of evil Skinwalkers that had tasted blood leaded by the evil Varek chases the boy while his family protects him.

Taglines:
The Beast Waits Within.

Continuity:
When Timothy and Kathrine are in the barn playing with the train set, she takes her ear phones out. They appear and disappear repeatedly throughout the whole scene.

Varek:
Don't make me do something I don't want to do. Join me. We're one and the same.

Varek:
I am what I was meant to be. You live a lie… we were wrong. I know what you're feeling, trust me.

Varek:
I am NOT human. And I will not risk spending the rest of my days as one. Deseased and flawed… we're better than that.


Werewolf movies are always difficult to make. They touch on an area of
mythology that has so many facets, it's impossible to please everyone.

Everyone from Asia to the Natives of North America have tales of
shape-shifting humans, and for some reason wolves became the go to
animal for it. Stoopit sheep farmers…

I honestly liked this flick… I won't go so far as to say it's a must
see, but it was entertaining and had just enough bite (see what I did
there? classic comedy).

It's extremely difficult to sell a werewolf movie to someone who
doesn't dig them in the first place.

They're nothing like vampyres. They aren't sexy, they aren't stylish,
and they hardly ever keep a loft in a New York high rise.

Werewolves are the blue collar creature. They're always running,
fighting, and sweating for everything they need.

And this flick does just that…

They start the clock running from the outset and establish that a
single boy holds the key to the destruction or salvation of a race of
werewolves, loosely based on the Native myths of Skinwalkers.

1 group attempts to protect the boy, while the other… Well… Wants
to eat him.

Along the way, a few thousand rounds are spilled out of big shiny guns,
and stuff gets blown up. There's enough sweat, hair tossing, and
growled lines to keep any action fan happy. There's the mandatory
martyr, rebel, desperate mother, and hot chick (even though she
definitely loses some looks when she changes, werewolves ain't sexy).
There's even the loving Grandma figure.

Turn off your brain, and pop some corn… You'll enjoy this flick if
you don't read much into it.