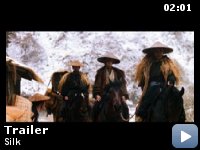 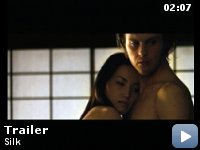 The story of a married silkworm merchant-turned-smuggler in 19th century France traveling to Japan for his town's supply of silkworms after a disease wipes out their African supply. During his stay in Japan, he becomes obsessed with the concubine of a local baron.

Storyline
A married silkworm smuggler, Herve Joncour, in 19th Century France who travels to Japan to collect his clandestine cargo. While there he spots a beautiful Japanese woman, the concubine of a local baron, with whom he becomes obsessed. Without speaking the same language, they communicate through letters until war intervenes. Their unrequited love persists however, and Herve's wife Helene begins to suspect.

Factual errors:
When Hervé Joncour is bargaining with the Japanese man, the Japanese man holds up five fingers and says "Go", which when translated to English means five. However, Joncour responds to the man by saying "Four".

Hervé Joncour:
Steaming water. Strange trees. Laughing children. Her skin… those eyes. But why should I tell you about it? Why now? Maybe I just need to tell someone about it. And that someone is you.

A work of Art.


The lemming-like critics thumped this movie as hard as they could. In
their reviews words like "limp," "vacuous," "boring," "underwhelming"
are thrown around like children toss crayons.

Most of them should be immediately and summarily fired because they are
hacks. Along with Once, this is one of the best films of the year.

My suspicions were affirmed today when I felt something was funny about
the way all the critics panned Silk like it was an affront to good
taste. What an appalling joke. Don't human beings think and feel and
perceive like sensitive creatures anymore? Have we become so hard and
trite and caught up in our routines that we no longer care about works
of art? I'm ashamed to belong to a society that not only rejects but
ignores great films and art.

A caveat: See this film alone or with a mature lover but make sure you
see it in the theater. Do not attempt to see it with someone who lacks
patience or some semblance of artistic vision. Anyone out there who
even has a small inkling of the poet in them must see this film.

This movie is about the richness of our senses and perception. The
opening scene features a naked woman in a hot spring surrounded by
snow. The steam rises as we approach her and we can feel the warmth of
the water, the coldness of the air; the exposed, vulnerable nature of
our existence and our longing to connect and make contact with another
human being, skin to skin.

Of course the film covers other areas but the opener is a nice start.
This movie takes its time. When the tea is poured or the snow falls,
that's our cue to settle in a little deeper, to feel.