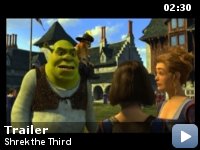 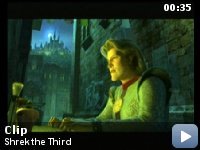 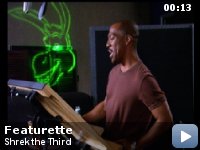 When his new father-in-law, King Harold falls ill, Shrek is looked at as the heir to the land of Far, Far Away. Not one to give up his beloved swamp, Shrek recruits his friends Donkey and Puss in Boots to install the rebellious Artie as the new king. Princess Fiona, however, rallies a band of royal girlfriends to fend off a coup d'etat by the jilted Prince Charming.

Storyline
When Fiona's father and King of Far Far Away passes away, the clumsy Shrek becomes the immediate successor of the throne. However, Shrek decides to find the legitimate heir Artie in a distant kingdom with his friends Donkey and Puss in Boots to be able return to his beloved house in the swamp with the pregnant Fiona. Meanwhile, the envious and ambitious Prince Charming joins the villains of the fairytales plotting a coup d'état to become the new king.

Taglines:
The best Shrek yet!

The stain glass window in the background of the knighting scene, is a reference to St. George slaying the last dragon in England. It is also a reference to a prince slaying a dragon to save a princess, or in the case of Shrek, an ogre.

Continuity:
In the scene before the play sequence towards the end of the movie, the first shot is a wide shot showing the castle in the background with the path in front of it with Donkey, Puss, the Three Pigs, Pinocchio, Gingy and the Wolf just off to the right. The path is completely empty, and there is no sign of Artie in the shots of the path showing it behind the characters, yet seconds later, Artie suddenly appears on it.

Prince Charming:
Onward, Chauncey! To the highest room of the tallest tower, where my princess awaits rescue by the handsome Prince Charming!

Too many characters to love–and that's a bad thing. And the spark is gone.


I have been bouncing around for weeks in anticipation of this movie. As
a huge fan of the first two movies, I was sure this one would not
disappoint. But, oh, how wrong I was! While not as bad as many a film
out there, this installment is yet a sad shadow of its series.

And it tries, it really did try. To its credit, there were several very
clever scenes. The typical Snow White's gift with animals takes an
awesome turn, and I can guarantee that you will never laugh harder at a
death scene than the one of this movie. The animation? Top-notch.

I just guess effort doesn't always beat out sheer inspiration. A film
with a few moments does not win against a good, simple movie.

The desire to produce a film merely ended up as a plot device to get
Shrek and Fiona back to their beloved swamp. A long, boring plot
device. With the passing of King Harold, Shrek and Fiona are heirs to
the throne of Far, Far Away. Unfortunately, that does not interest
them, so Shrek goes on a journey to bring back the next guy, a young
Arthur "Artie" Pendragon. Heck, why not? Everyone loves a good Camelot
infusion, and Artie is as flawed and as likable as you could want.
Unfortunately, he is only one character in a cheesy madhouse of minor
characters and cameos. In the effort to get everyone their screen time,
that whole plot gets lost in the background.

Which normally wouldn't be a problem. After all, the original movie did
not have the most complex of plots. What it had was a few incredible
characters. The second movie added a few more, but still kept it
delightfully manageable. This time, it seemed that the powers that be
assumed we already knew everything about Shrek, Donkey, Puss, and the
rest of the bunch that we really didn't need to see them. Hey, let's
bring in one more characters for the audience, but refuse to give them
time to get to know them! Poor, pathetic lack of character development.

So back to the plot. The few times that came around, it was pretty much
a tacky, forced attempt to create some pseudo father/son relationship
between Shrek and Artie. Good intentions, but no cigar. Maybe if we had
more time… But we don't, so let's just wrap it up with a few corny
lines about understanding and rising to the occasion. Yeah, we got that
the first time around, and without any of the verbal commentary.

On top of that, this film misses that inexplicable spark of the first
two installments. I'm sorry, but I just didn't feel it. Just as a
lukewarm attempt of continuing the series and aiming at a five-year old
audience.

Sorry. Not my favorite of the series by any means, leaving me to wonder
how a sequel to films of such genius as "Shrek" and "Shrek 2" could
make something so average?

TagsEngland
2 Days in Paris
The Diving Bell and the Butterfly