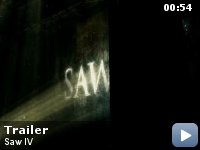 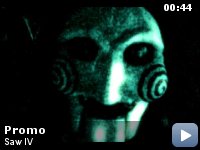 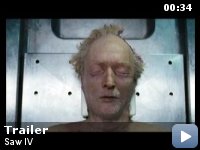 Jigsaw and his apprentice Amanda are dead. Now, upon the news of Detective Kerry's murder, two seasoned FBI profilers…

Storyline
Jigsaw and his apprentice Amanda are dead. Now, upon the news of Detective Kerry's murder, two seasoned FBI profilers, Agent Strahm and Agent Perez, arrive in the terrified community to assist the veteran Detective Hoffman in sifting through Jigsaw's latest grisly remains and piecing together the puzzle. However, when SWAT Commander Rigg is abducted and thrust into a game, the last officer untouched by Jigsaw has but ninety minutes to overcome a series of demented traps and save an old friend or face the deadly consequences.

Taglines:
If it's Halloween, it must be Saw

This first installment of the franchise which does not open with a character in a trap.

Continuity:
When Art goes to stop the guy from jumping off the block of ice the first time, you hear the sound of the gun cocking. In the next view we see the gun and the hammer is not cocked.

Riveting and mind-boggling: after three sequels, the SAW franchise sky-rockets

Who would've thought that a slasher horror film franchise, after three
sequels, could STILL be one of the best things Hollywood has to boast
today? Not I, that's for sure. The intricate, original, crowd pleasing,
absolutely shocking, riveting, suspenseful "Saw" wowed audiences in
2004 and a very solid sequel did the same in 2005.

I still remember seeing Saw and Saw II for the first time and realizing
how amazing they were. Yet, I was unhappy with Saw III along with many
others for reasons being: it focused more on violence than plot, there
was no twist, and the ending was very unsatisfying.

I know for a fact I wasn't the only person who thought the "Saw"
franchise was officially over, judging by the very disappointing third
film…yet, I still possessed a strange love for these films and
couldn't wait to see the fourth when it hit theaters. I wasn't
expecting a masterpiece at all…but I got one.

"Saw IV" is not the average horror flick. If you're a Saw fan that
likes the series for its blood and guts, you're going to despise it. If
you're not willing to completely concentrate on the film's every little
detail, you're going to despise it. If you feel like just kicking back,
watching a nice gory horror film, and not spending a night analyzing
the film, racking your brain until you drive yourself insane, you're
going to despise this film. Quite honestly, that's why so many people
hate this film: because they were expecting something completely
different. Make no mistake–the Saw franchise as we know it is now
going in a completely different direction.

Here's where the line's drawn between Saw IV and it's predecessors.
With the deaths of two main characters in Saw III, you can't possibly
think of how Saw IV could really be close to a decent film. Instead of
a basic storyline of traps, unlucky individuals who don't appreciate
their lives, and suspenseful jump scenes, Saw IV delivers a completely
different premise: it's darker, edgier, scarier, more complex, more
intricately designed, and more controversial than its predecessors. In
some ways, the most horrifying thing about the film is instead of
watching people being tested on screen–YOU, as a viewer, are
tested–challenged to see what Jigsaw sees, feel what Jigsaw
feels…judge how Jigsaw judges. The traps aren't there to entertain,
or to make you recoil in disgust…they're there to make you THINK.

Even if you don't want to, or don't feel like it, Saw IV will whisk you
away into a land of nightmare where you're forced to make the choices
to what happens to the individuals on screen–you're the one in
control. By the end of the movie, you'll be so shaken up you won't be
able to move. For me, this one "Saw IV" HUGE points because it's
actually scary, unlike II and III! It's not a body-count movie–it's a
riveting, mind-boggling psychological thriller in the sense of the
first film. The film feels like it balances a huge amount of plot and
story and a huge amount of gore and ends up taking the cake. The film
is exceptionally, brutally violent (even more so than Saw III) and some
scenes are very, very disturbing–not because they are violent, but
because stuff so horrifying is happening you just want to vomit your
brains out. Saw IV is NOT for the faint of heart and there is some very
disturbing sexual violence in one scene and another massively
disturbing scene where five people in my theater got up and left…and
this scene has haunted me since I came out of my theater.

Though horror veterans James Wan and Leigh Whannell, the original
creators of Saw, did not write Saw IV–it almost seems better. Darren
Lynn Bousman's exquisite directing incorporates a dire sense of urgency
throughout the whole film, making it feel like you're watching a "24"
episode.

I will warn you now the ending will confuse the hell out of you, which
apparently is another reason for people to completely, wrongly condemn
this film. Me and my friends spent a good two hours discussing the film
afterwards and it made much more sense to us. Be prepared to watch this
film with an open mind and be ready for some serious post-viewing
discussion afterwards. The ending is very much like that of "The
Prestige," and you may have a desire to watch "Saw IV" again the minute
it ends.

If you're a Saw fan that was disappointed with the lack of
psychological horror in Saw II and Saw III—fear not. Saw IV has what
you're looking for and will take you to hell and back…but hold onto
your dinner. I have no idea how this film made it past the MPAA without
an NC-17 rating. Along with your dinner, try to hold onto your sanity
while watching the film…good luck with that.

Enjoy which, is in my opinion, one of the best treats of the 2007 movie
season.