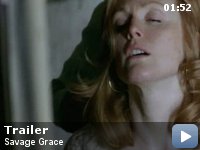 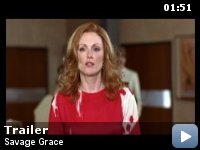 A dramatization of the shocking Barbara Daly Baekeland murder case, which happened in a posh London flat on Friday 17 November 1972. The bloody crime caused a stir on both sides of the Atlantic and remains one of the most memorable American Tragedies…

Storyline
The true story of the beautiful and charismatic Barbara Daly, who married above her class to Brooks Baekeland, heir to the Bakelite plastics fortune. Their only child is a failure in his father's eyes, and as he matures and becomes increasingly close to his lonely mother, the seeds for tragedy are sown.

The castle that serves at the Baekelands' retreat in Mallorca is an 800-year-old castle in Spain, which is allegedly haunted by a ghost named Blanca.

Anachronisms:
The Ambulance at the end of the film is a mid-seventies Chevrolet Van. While this might be correct for Spain, it would not be used in London as in the film.

Antony Baekeland:
[Tony quoting something his grandfather used to say]
"One of the uses of money is that it allows us not to live with the consequences of our mistakes."

That of a Mother


When I was growing up, my mother could be a little over involved in my
life but she's got nothing on Barbara Baekeland (Julianne Moore).
SAVAGE GRACE tells Barbara's story and that of her incalculable
influence on the direction of her very tight family. Together, Barbara,
Brooks (Stephen Dillane) and Tony (Barney Clark as a boy, Eddie
Redmayne as an adult), exist in a tiny bubble where they can be seen by
and perform for the rest of the world but ultimately exist solely for
each other. Rich beyond their own comprehension, the Baekeland's exude
an air of arrogance and thrive on the act of acting. And even though,
as the years pass on, the friends, acquaintances and passersby will
have run far away, the Baekeland's still have us.


The Baekeland's come from money. Well, at least Brooks does. His father
was the inventor of Bakelite, a popular plastic. Barbara, a former
model and almost famous actress, married into the fortune and it suited
her just fine to do nothing but be seen. With no real drama to occupy
their time, the Baekeland's must create their own and they become
experts in the craft. And like the entirely selfish parents they are,
they teach their young son, Tony, everything they know. First time
feature filmmaker and brave soul, Tom Kalin, tells their revolting yet
tragic story in a manner that neither glorifies nor condemns their
demented ways. All the while though, he centers his attention on Tony
so that we never forget who the real victim is. This makes it all the
more deplorable when Tony abandons reason to embrace his family
heritage.

SAVAGE GRACE is not for all. Make no mistake, when I say that the
Baekeland's ruin each other and bring about all of their own
misfortune, I am not speaking lightly. This is a family that shares
baths, beds and lovers. Kalin is mindful of his audience's likely
discomfort but also never afraid to show that audience the dirty
details. Besides, when all the debauchery becomes too much to handle,
one can always look to Moore and bask in her brilliance. Moore is
flippant one moment and affected the next. Her performance is so
delicately balanced between calculated control and callous chaos that
one never knows which way she'll turn and one is always shocked to find
out. Both Dillane (who is practically unrecognizable) and Redmayne (who
could so easily be related to Moore in reality with his pale, freckled
skin) do more than simply hold their own. They complete the trio and it
is a delight to watch them play off of each other, albeit a disturbing
delight.

Kalin has not only crafted an engaging film but also a bizarre
experience. If you can stomach this true story, then you will be
treated to a frankness that is not common in American cinema. You will
also get to spend time in dark places you may not be accustomed to.
However, when you inevitably arrive safely on the other side, you will
know the drastic differences in what it means to be fortunate.