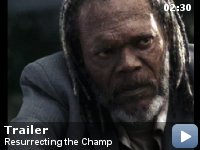 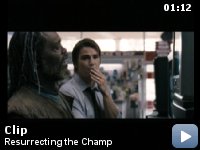 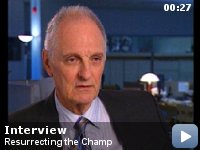 Up-and-coming sports reporter rescues a homeless man ("Champ") only to discover that he is, in fact, a boxing legend believed to have passed away. What begins as an opportunity to resurrect Champ's story and escape the shadow of his father's success becomes a personal journey as the ambitious reporter reexamines his own life and his relationship with his family.

Storyline
A young journalist comes to the aid of a homeless man who claims he is a former heavy weight title contender. Seeing a chance to redeem his struggling career, the writer's story of the champ's life raises questions about the past that will threaten all he holds dear.

Taglines:
Based on a true story, that was based on a lie.

The story was inspired by the article "Resurrecting the Champ" by J.R. Moehringer which appeared in the Los Angeles Times Magazine in 1997; although the article indeed purportedly focused on Bob Satterfield, there are various other differences with the true story. Moehringer had no children, and his father was not well-known though he did abandon his family when the writer was an infant.

Continuity:
When Erik leaves Champ at the house they were conversing in front of, Champ is shown standing on the curb as he contemplates knocking on the door of the house. Then, as Erik is driving away, he looks into his rear-view mirror, and Champ is instantly shown standing in the middle of the street instead of on the curb.


I saw this movie recently at a screening. Everybody's already talked
about the plot so I don't need to get into those details. What I think
this movie will be known for is its performances (more on that in a
second…), and its how uplifting it is. You leave the movie feeling
great and for reasons that I will not get into, it makes you want to
call your dad and tell him how much you love him (or your son). A lot
of people will talk about Samuel L. Jackson's portrayal of the worn-out
boxer, but the true revelation of the film is the acting of Josh
Hartnett, who I have never thought could be so believable or appealing.
He has always been just kind of a pretty boy, really. But here, he
plays a father, a husband, a journalist, and according to Aristotle's
definition, a classic "Tragic Hero." He desires to impress his son to
the degree that he sometimes bends the truth a bit too often…which
ultimately annihilates his relationship with his son. The child, Teddy,
is played by a kid named Dakota Goyo, who will become a big star. Teri
Hatcher's cameo brought humor to the film when needed. If I had a
criticism, it is that the film might be a tiny bit lengthy; however,
every moment of the film was well-done. I wouldn't know how to make it
shorter. I highly recommend this movie to everyone.