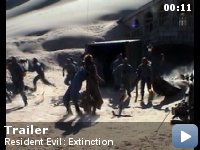 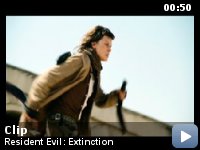 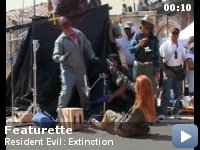 Survivors of the Raccoon City catastrophe travel across the Nevada desert, hoping to make it to Alaska. Alice joins the caravan and their fight against the evil Umbrella Corp.

Storyline
Years after the Raccoon City disaster, Alice is on her own; aware that she has become a liability and could endanger those around her, she is struggling to survive and bring down the Umbrella Corporation led by the sinister Albert Wesker and head researcher Dr. Isaacs. Meanwhile, traveling through the Nevada Desert and the ruins of Las Vegas, Carlos Olivera, L.J., and new survivors K-Mart, Claire Redfield, and Nurse Betty must fight to survive extinction against hordes of zombies, killer crows and the most terrifying creatures created as a result of the deadly T-Virus that has killed millions.

Taglines:
All Bets Are Off

Raccoon City is clearly Detroit, Michigan from the graphic about 6-7 minutes into the film. The Detroit river and Belle Isle are clearly discernible, as is the half moon shaped industrial park to the North (towards the left in the film).

Continuity:
During the crow scene when the flamethrower is about to incinerate Carlos, the woman he is holding has her hand on his shoulder. When we cut to Alice in the next shot we can see the woman's hand slide down off of Carlos' shoulder and then reappear there in the next shot.

Dr. Isaacs:
Take a sample of her blood, and then get rid of that.

Im not sure what video gamers were expecting when this series was
turned into film. Just like books, comic books, and whatever else, the
source material will more often than not be different from the film.
However, that is not always a bad thing. Take Jurassic Park for
instance. The movie was phenomenal, but nothing like the book. Anyways,
the reason i'm saying this is because I myself have played the games
and have enjoyed the movies quite a bit. Sure, there not masterpieces
by any means, but I think they are time well spent to escape reality
for a couple of hours. I think Milla plays a great heroine in distress
and a serious badas s. The character development in this is non
existent. You get a little speech to bring you up to speed, but if you
haven't seen these before, you will be lost in the film. (A friend that
I had brought asked me how Claire Redfield knew how to fly a
helicopter.) But you're not in this movie for the character
development. You want to see zombies die and Milla kick butt, and that
is what this film delivers. There are some great scenes here and some
pretty fun kills, not a whole lot that you haven't seen before, but
still entertaining. The movie goes pretty quick and has some very nice
things to add. Alice's telekinesis was very cool to watch, and I can
see why she didn't get to use it a lot. A lot of the special effects
were much better here than they were in previous films, and that was a
definite plus. The bad is that it ends for another to be made, and this
is supposed to be the last. A lot of main players lose their lives, and
that's fine, cause the movie doesn't give you time to care for them.
Nope, the main focus here is Milla and she delivers the goods. Good
fights, good kills, not much logic, pretty decent special effects, and
the greatest pot smoking scene in history make this worth seeing in my
opinion. If you liked the first two, you should enjoy this just the
same. Personally, I don't think any of them have been too bad.


P.s. why did they keep airbrushing Milla's face, she is entirely too
beautiful for that.