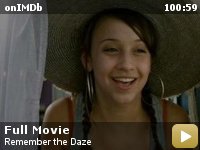 A glimpse into the teenage wasteland of suburbia 1999 that takes place over 24-hours, and the teenagers who make their way through the last day of high school in the last year of the past millennium.

Storyline
A glimpse into the teenage wasteland of suburbia 1999 that takes place over 24-hours, and the teenagers who make their way through the last day of high school in the last year of the past millennium.

Great movie for the right audience


This movie was phenomenal for the audience who can understand it on a
deeper level (Think "The Fountain"). Yes, on the surface it seems like
another "Dazed and Confused", but its very accurate to its 1999 time
period, and the sex and drugs are a key element to what the movie's
about, because the sexual desires and drugs are what bring everybody's
different social groups together. The reason why some people might hate
this movie is because it isn't plot driven. It's instead character
driven, and the interesting thing about it is that it doesn't really
have lead characters, it just has an outstanding ensemble cast of some
rising stars like Khleo Thomas, Melonie Diaz, Lyndsy Fonseca, Amber
Heard, Alexa Vega and Chris Marquette, and some newcomers like Charles
Chen, Shahine Ezell, and Katrina Begin. I agree with the other
commenter that they did an excellent job with the casting, which is
very important in a character-driven film. I disagree however, with the
comments that Jess Manafort's script tries too hard to be filled with
"funny" stoner jokes. There's so much going on in this film, there's so
many different characters leading different lifestyles that end up
colliding, that for each thing you may hate about the film there will
always be something you love. Amber Heard and Melonie Diaz stole the
show for the female casting, and Chris Marquette and Charles Chen had
to be my favorite male characters. Like I said in the beginning, if you
watch this movie on the surface it may seem stupid and old. If you
watch it with more concentration to find a deeper meaning, it becomes
an excellent teenager film about the key to blending the high school
cliques so everybody fits in. I highly recommend it.