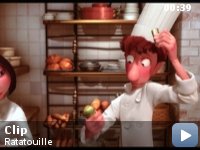 Remy is a young rat in the French countryside who arrives in Paris, only to find out that his cooking idol is dead. When he makes an unusual alliance with a restaurant's new garbage boy, the culinary and personal adventures begin despite Remy's family's skepticism and the rat-hating world of humans.

Storyline
A rat named Remy dreams of becoming a great French chef despite his family's wishes and the obvious problem of being a rat in a decidedly rodent-phobic profession. When fate places Remy in the sewers of Paris, he finds himself ideally situated beneath a restaurant made famous by his culinary hero, Auguste Gusteau. Despite the apparent dangers of being an unlikely – and certainly unwanted – visitor in the kitchen of a fine French restaurant, Remy's passion for cooking soon sets into motion a hilarious and exciting rat race that turns the culinary world of Paris upside down.

Taglines:
A comedy with great taste.

Brad Bird, producer Brad Lewis and some of the crew went to Paris for a week to get the feel of the city. They took a motorcycle tour around the capital and ate at its five top restaurants.

Continuity:
When the chefs celebrate the success of the Sweetbread prepared by Linguini, we see five hands clinking five glasses of wine. But in the next shot, we see six chefs, each one holding a glass of wine.


Remember how everyone was talking about Toy Story when it first came
out? The incredible visuals, unique style, vividly imagined world? The
next time people were talking that way with such enthusiasm about a
computer animated movie was Finding Nemo. I'm excited to say that
Ratatouille will be the next one to redefine the visual creativity and
technical detail of computer animated movies. Honest to goodness, I was
awestruck by the animation, and that never happens to me. It is a
visual masterpiece of a movie if ever the term applies.


The next thing to talk about is the "genre" of the movie. As Pixar
enthusiasts will tell you, Brad Bird, the director of Ratatouille, also
directed The Incredibles, which has the most inspired and creative
action sequences from any of the Pixar movies. Ratatouille, while not
so straightforward with its action, has almost as much as The
Incredibles did, in unique ways. Most memorable is the shotgun scene
near the beginning. (You'll know what I'm talking about when you see
it). Other than that, this is the expected comedy-with-heart movie from
Pixar that so many have grown to love.

The voice acting? Spot on. Every voice is distinctive, and it never
feels like a celebrity's voice tacked on to a character (Shrek, I'm
looking at you), it feels like the characters themselves speaking. You
can't ask for more from voice acting.

And finally, the script and the story. The entire irony of the story —
a street rat with a passion for fine food — is beautiful, and a tight,
smart, wonderful script flows from this. The pacing of the story is odd
and choppy at places, but this is a very forgivable grievance. The only
other minor fault is that a few of the dramatic one-liners feel a bit
forced. Other than that, this is the most layered, complex, and
satisfying script from Pixar since The Incredibles.

Overall, I recommend that everyone see this movie when it hits theaters
(I was lucky enough to see a pre-release screening). Though not
perfect, it is an animated masterpiece in true Pixar form with
breathtaking animation and visual design.