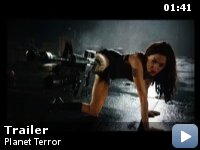 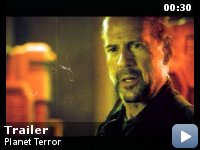 After an experimental bio-weapon is released, turning thousands into zombie-like creatures, it's up to a rag-tag group of survivors to stop the infected and those behind its release.

Storyline
After an experimental bio-nerve gas is accidentally released at a remote U.S. military base in Texas, those exposed to the gas turn into flesh-eating, mutating zombies out to kill. An assortment of various people who include stripper Cherry, her shady mechanic ex-boyfriend Wray, a strong-willed doctor, the local sheriff, and an assortment of various people must join forces to survive the night as the so-called "sickos" threaten to take over the whole town and the world.

John Carpenter, who composes the scores to his own films, was originally chosen to compose the score to Planet Terror. Robert Rodriguez ended up taking over the job as composer instead, though excerpts from Carpenter's
Escape from New York score would appear throughout the film.

Skip:
Goddammit, girls – if you're gonna do that shit, do it onstage!
[walks away]

Wild, bloody and deliriously entertaining: Fun with a capital "f"!


Because of low box office returns in the USA (total gross: 25 million
$; movie's budget: 100 million), that outrageously mouth-watering
experiment known as Grindhouse was split in half for the European
release: first came Quentin Tarantino's Death Proof, a masterful
reinvention of the slasher flick, the main strength of which was
focusing on characters and atmosphere rather than film references; and
now comes Planet Terror, Robert Rodriguez's zombie opus which has
"excessive" (read: fun) written all over it.

That this is going to be a different cinematic experience is obvious
before the movie's even started, as it is preceded by the RIP
(Rodriguez International Pictures) logo and the fake trailer Machete
(the other three are not included in the separate cut), starring Danny
Trejo: a bona fide B-movie advert, so gloriously OTT the MPAA would
never approve it in real life (swearing, nudity and explicit violence:
not good). After that, it's straight into the action: some virus turns
people into flesh-eating freaks, spreading panic all over the country.
While most poor fools get eaten, a small group organizes some kind of
resistance. These people include Cherry Darling (Rose McGowan), a
former go-go dancer, her ex-boyfriend and martial arts expert El Wray
(Freddy Rodriguez), a nurse (Marley Shelton) who is about to leave her
husband (Josh Brolin) and a few law enforcers (Michael Parks, playing
Earl McGraw for the fourth time, and Michael Biehn). Against them,
aside from the zombies, is the military, who for some reason wants to
keep the virus around. And as the inevitable final battle approaches,
the blood keeps flowing freely.

At first sight, Planet Terror may seem like the lesser of the two
Grindhouse halves, mainly because the director, unlike Tarantino who
made the separate version of Death Proof longer and better-looking,
hasn't modified his segment at all (aside from reinserting half an hour
worth of excised material): the scratches and aging signs are still
there, and the "missing reel" (a love scene between the two leads) is
still missing. But that's probably because Rodriguez, in true B-movie
tradition, was more concerned with the style, of which the aging stuff
is an integral part. So, while it is undeniable that QT's episode is
superior artistically speaking (smarter script, better dialogue, more
artful direction), it is equally undeniable that RR, knowing he can't
bring anything new to the genre (George Romero and 28 Days Later…
have already done it), puts all his energy in the execution (pun not
intended) and delivers exactly what the audience demands: from sexy
start to gory finish, Planet Terror is a 105-minute long, shamelessly
overblown money shot, a picture that dumps all pretensions and sets out
to simply entertain.

The focus on blood and guts (and there's plenty of them), however, does
not make the film a mere exercise in style, because while he may not be
as skilled a writer as his partner, RR manages to deliver some
memorable lines (a satirical stab at Bin Laden being the standout) and
craft excessive yet immediately likable characters, all played with
almost puerile joy by a terrific cast: McGowan, who was killed off
immediately in Death Proof, makes up for it here by giving flesh (and
what flesh) to one of the toughest babes ever to hit a screen (the
image of her with a machine gun instead of her missing leg is already
iconic); Freddy Rodriguez, having stolen scenes for five years in Six
Feet Under, is completely at ease in the role that should make him an
A-lister; Naveen Andrews, best known for playing Sayid on Lost, has the
fun of a lifetime shaking off his nice guy image as a
testicle-collecting (!) scientist; and finally, people like Bruce
Willis and Tarantino (whose part is ten times as crazy and hilarious as
his Death Proof cameo) pop up briefly to memorable effect for one
simple reason: they just want to have a good time.

A good time: that is all Planet Terror has to offer, no more, no less.
And those seeking sheer entertainment, albeit delivered with gusto,
should be able to enjoy this riotous adventure, as long as they are
able to stomach sequences so insanely violent they make Desperado or
Kill Bill look like children's flicks. In other words: this is a damn
good "bloodbuster".