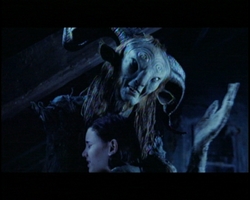 In the fascist Spain of 1944, the bookish young stepdaughter of a sadistic army officer escapes into an eerie but captivating fantasy world.

Storyline
In 1944 fascist Spain, a girl, fascinated with fairy-tales, is sent along with her pregnant mother to live with her new stepfather, a ruthless captain of the Spanish army. During the night, she meets a fairy who takes her to an old faun in the center of the labyrinth. He tells her she's a princess, but must prove her royalty by surviving three gruesome tasks. If she fails, she will never prove herself to be the the true princess and will never see her real father, the king, again.

Taglines:
Open the door to another world and an exciting new vision in cinema

It has been said that, for the fairy eating scene, Doug Jones had to bite condoms filled with fake blood.

Revealing mistakes:
When Ofelia goes down the stairs in the labyrinth and is talking to the Faun, his shadow still shows Doug Jones' legs while they are in the stilts. The special effects crew took out his physical legs, but the shadow still exists.

Pan:
A long time ago, in the underground realm, where there are no lies or pain, there lived a Princess who dreamed of the human world. She dreamed of blue skies, soft breeze, and sunshine. One day, eluding her keepers, the Princess escaped. Once outside…


I saw the film at FrightFest in London a couple of days ago, and was
pretty well sure I'd be seeing something special – but I ended up
seeing a film that is downright extraordinary. Brutal but beautiful,
magical yet earthy, it has a remarkable cast, with standout
performances all round.


A special mention must go to Sergi Lopez, whose 'Captain Vidal' is
indeed one of the most sadistic film creations ever seen. Yet he
manages to make the audience understand why he is the way he is … an
astounding performance. Maribel Verdu's quiet but rebellious
housekeeper is one of the strongest female roles I've seen in many a
year, and she is supported by a wealth of talent. Young Ivana Baquero
is surprisingly self-assured as 12-year-old Ofelia, and I especially
liked her almost Alice-like approach to the magical creatures she
encounters in the labyrinth. The icing on this warped fairy tale is
Doug Jones, who gives a towering performance – and in this case
literally, as well as figuratively – as the guardian of the labyrinth,
a faun, full of grace and charm and latent menace. Although dubbed, his
Spanish is perfect (Jones speaks not a word of the language), and his
physical presence is incredibly powerful as his character teases,
cajoles and harries Ofelia to fulfil her tasks. He also plays the
devastatingly creepy and disgusting 'Pale Man' – a creature that almost
equals Vidal in his terrorising habits.

But the cast is just one facet of this gloriously photographed film,
with Javier Navarrete's hauntingly simple score weaving itself into the
fabric of a film perfectly edited and written. The brutality of
post-Civil War Spain contrasts with the world of magic to which Ofelia
is drawn, yet everywhere she goes she has choices to make. In fact the
film is about choices, good and bad, and one discovers that no matter
how desperate a situation becomes, a choice is always available –
although that choice may mean one's death. The film is violent – very
violent, but each moment of brutality, although graphic, has a purpose
– nowhere is it gratuitous.

I loved it – as I knew I would – and if the Oscar voters don't give
this film at least a nod for Best Foreign Language Film next year, then
I will know that they have lost any sense of reason or comprehension.
Because this film is truly a masterpiece, and Del Toro's greatest work
to date.